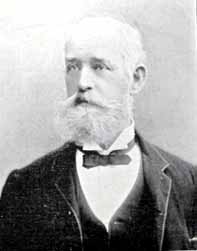 William Tulloch was born in Perth, Scotland in 1829. He migrated to Sydney NSW on the ship Duke of Richmond in 1844, proceeding to Geelong in January 1845 and subsequently moving to Ballarat.

He had sixteen children, eleven were still living around 1894.

Tulloch had connections with the Old Colonists' Association.[1]

Tulloch purchased most of the land used by the Ballarat Brewing Company. Teaming up with Alexander McLaren, Tulloch constructed the 'Royal Standard Brewery' on blocks S9-17 and S9-18 of brick and bluestone to the design of architect Henry R. Caselli. It became the Ballarat Brewery and in 1958 was sold to Carlton & United Breweries. The brewery closed in 1989 and was sold to the Ballarat School of Mines in 1994.[2][3]

An old and highly respected citizen of Ballarat, Mr William Tulloch, who, for a long time past, had been in failing health, died at his residence, Errard street south, at 7 o'clock yesterday morn ing, the cause of death being a general break up of the system.The deceased, who was one of the leadings brewers of Ballarat and district, was a native, of Perth, Scotland, and was born in 1828. He landed in Sydney in 1844, and in the following year proceeded to Geelong, where he engaged in various occupations, including, cattle dealing, digging, and store keeping, until he finally turned his attention to brewing, at which he re mained to the end In 1863 Messrs Tul loch and M'Laren established The Royal Standard Brewery at Ballarat, and in 1890 the name of the firm was changed to Tulloch and Son, comprising Mr W. Tulloch and his son, Mr W. G. Tulloch, Branch establishments were established, at Melbourne and Geelong. Latterly the breweries have been carried on under the name of the Ballarat Brewing Com pany, Messrs Coghlan and Tulloch being the principal partners. The deceased who, in the early days, took a deep in terest in public affairs was a member of the first council of Ballarat. For seven or eight years he filled that position, and performed the duties pertaining to the office in a thorough and satisfac tory manner, rendering services of a substantial and lasting, character while occupying a seat at the council table. Up to a few months ago only three mem bers of that council remained alive, they bring Dr Stewart, Mr Tulloch, and Mr Jas. Oddie. Dr Stewart died a short time ago, and the demise of Mr Tulloch leaves Mr Oddie the only survivor. The late Mr Tulloch was at one time connected with the Old Colonists' Association, Art Gallery, and Mechanics’ Institute. He was a most genial gentleman and was of a charitable disposition. The deceased leaves a large grown up family Mr James Tulloch, the manager of the Royal Standard Brewery, is a son. Other sons are Mr T. Tulloch, Melbourne representative of the Ballarat Brewing Co.; Mr Harry Tulloch, of the Tulloch Proprietary Printing Company, and Mr Charles Tulloch, the well-known oarsman, who is employed as accountant at the general depot, Dana street.[5]

Transcription of Headstone in the Ballaarat Old Cemetery