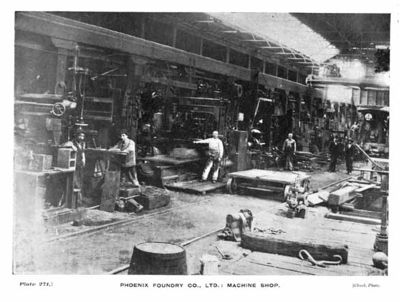 By the end of its first decade, and before the arrival of the railway from the coast, Ballarat had developed a sophisticated range of metal processing and fabricating industries. Although such trades have historically been associated locally primarily with gold mining, from the late 1850s they were assisting any iron users in the district. Saw millers, grain millers, manufacturers, farmers and even housewives began to patronise local foundries.

What is a foundry?

The common usage of the term "foundry" can vary greatly from the technical use of the term. According to the Oxford Dictionary a foundry is a place where metal is melted and moulded or things are made of metal.[1] Metallurgy for the Non-Metallurgist precisely describes a foundry as a 'commercial establishment or building where metal castings are produced.[2]' And from Brown's Dictionary of Metallurgy we know that casting is the 'practice of pouring molten metal into a mould and allowing it to solidify. If the resultant item is of approximately the final shape, requiring only final machining and other treatments that do not involve significant deformation, it will be described as a Casting. If the cast item is to be wrought to shape by rolling, forging, etc., it will usually be described as an Ingot'.[3]

The events of the Industrial Revolution in Britain occurred in such a way that the Revolution was drawn out over two distinct periods: 1760 - 1840 and 1840 - 1870. These two periods were distinguished by the changing nature of transport that dominated those particular decades: the first period being the expansion of canals and macadamised roads; the second being dominated by the locomotive.[4] By the early 1850s the Industrial Revolution in Britain was at its peak. That is to say, development had shifted from stupendous technological breakthroughs that radically altered the way that everything was done (like Watt’s Steam Engine) to a still rapid, but less dramatic, improvement in those technologies and their total expansion into all reaches of the UK. Yet, such all-encompassing improvements had not been achieved in the colonies of Australia. Although at this time the coastal cities (particularly Sydney, Melbourne and Geelong) were some of the busiest ports in the world and public infrastructure was rapidly improving – so that streetscapes began to vividly shift from collections of timber huts and tents on dirty roads to stylish brick buildings, footpaths and macadamised roads – the inland settlements were only just beginning to show signs of becoming permanently inhabited.

Steam driven mining equipment was introduced onto the Ballarat goldfields in the mid-1850s. As it was still fairly primitive, this equipment was often in need of urgent maintenance and repair. The formation of the Ballarat foundry industry from 1856 is considered by many historians interested in that period to be a response to the demand for urgent and specialised repairs to this new equipment. The industry built its reputation on an ability to effect repairs, and only later (towards the end of the 1850s) began to construct as much as to maintain plant and equipment for the mines.

The pre-eminence of the foundries in Ballarat industrial life was also indicated by their location in the heart of the main business districts of Ballarat East and West. Foundries were, in fact, at the heart of the transformation of Ballarat from its earliest origins as an aboriginal ‘resting place’ to a ‘rapidly maturing industrial centre, throbbing with the mechanical power of European civilisation.’

When the British emigrants found themselves land-locked on the Ballarat gold fields they first exploited the surrounding area for its resources. To do this, in a completely undeveloped environment, required the making of roads. But they quickly found that the Ballarat soils were unsuited to use as dirt tracks for heavy loads - the narrow soil profile gave way to clay soils or sands that rapidly became bogs at even the hint of wet weather. Stories of horses, carts or even men becoming stuck in these roads could be found reported in the colonial newspapers. The colonial men and women were quite inventive and developed numerous ways to overcome these issues, including the Plank Road. But railways had already reached a peak in their home countries, and many were eager to reproduce the progress - particularly for their own enterprises. A prime example of this use of railways (more properly referred to as tramways) was that of the Trial Saw Mill Co. from their felling operations on Mount Buninyong to their timberyard in Ballarat.

However, until the opening of the connecting rail link in 1862, it was a difficult and expensive business to service such equipment on Ballarat from Melbourne. 'Generally the pattern of metal road bridges reflects the settled and developed areas of Victoria, and concentrations of populations. The Melbourne, North East, Western and Central Regions account for the greatest numbers of metal road bridges. Particular concentrations can be found in Melbourne and around Geelong and Ballarat. The Geelong-Ballarat concentration is of note as this includes a number of important early wrought iron bridges. It is likely that the role of these towns in the development of metal manufacture and engineering was an influence in the construction of bridges in the region.'[7]

The foundries of late nineteenth century Ballarat were identified by historian Weston Bate as 'the sinews of a city'. The gold mining industry was heavily dependent on foundries to produce all the associated items, and as mining moved into the deep lead and quartz phases, the demand for foundry-produced goods grew accordingly. They manufactured boilers, engines, pumps, quartz-crushers, bells, chains, and pipes. As well, the growth of the Ballarat domestic market in the latter part of the century meant that foundries also moved into the manufacturing of ornamental articles such as cast iron lacework for verandas, horse hitching posts, and bollards.

Blacksmiths on the Goldfields