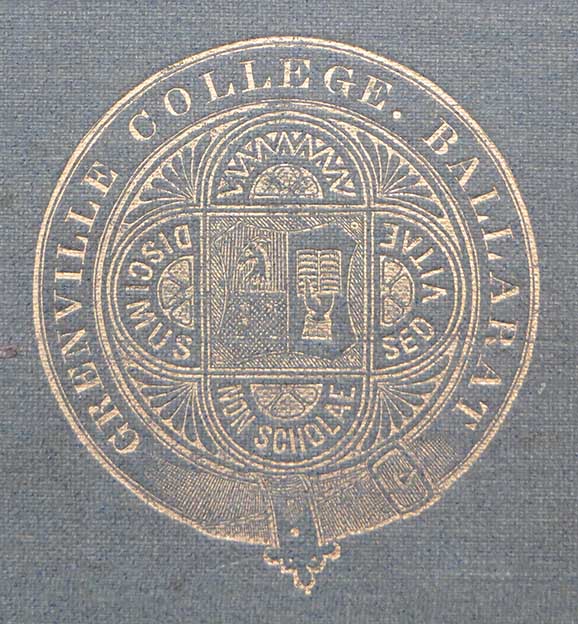 Grenville College Ballaarat was initially known as the Collegiate College or Collegiate and Grammar School. John Victor and H. B. De la Poer Wall went into partnership and determined to build extensive premises and to change the name of the institution. A residence on the corner of Holmes Street and Creswick Road was extended, and when completed will accommodate 300 boys. The new name, Grenville College, took effect upon removal to the new premises.[1]

Motto: DISCIMUS NON SCHOLCE SED VITAE,[2] translates from the Latin as 'To learn, not for school, but for life.'

Grenville College was founded in 1860. It was co-educational with an average number of 100 students in attendance, It's principal, A. A. Buley, M.A. was assisted by six colleagues selected for their special qualifications in their respective departments. The curriculum consisted of English, French, German, Greek and Latin, Geography, Commercial Studies, Ancient and Modern History, Mathematics, Scripture, Science, Music, Elocution and Gymnastics. The girls were offered Sewing and Fancy Work in addition. Particular attention was paid to the preparation of boys for the Ballarat School of Mines.[3]

The Grenville College magazine was called the "Gnarr Gnat"

Historic Ballarat School Demolished - One of Ballarat's early buildings, known in 1860 as Victor's Ballarat Collegiate School, in Holmes st, is now being demolished. The Martin Stoneware Company will erect offices on the site.
In later years the building was known as Grenville College until that institution ceased to function more than 30 years ago. Among students who attended Grenville College were Mr Menzies, Federal Opposition leader, and Mr John Curtin, former Prime Minister.[5]