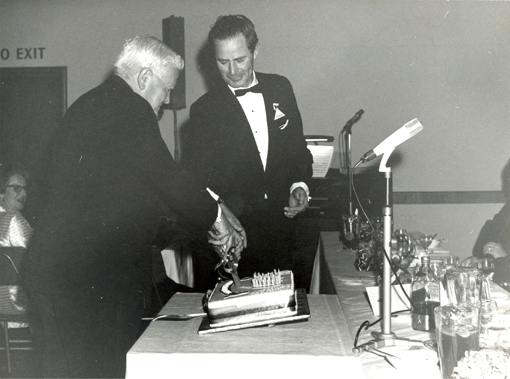 Albert Edward Stohr was born in 1902. He obtained a diploma in Civil Engineering at Swinburne Technical College, then proceeded to the University of Melbourne to take an honours degree in Civil Engineering in 1927.[1] He was a civil engineer by profession from 19 February 1945 until his retirement on 20 February 1970. He died on 18 June 1976.[2]

Stohr's early career started as Civil Engineer with B.H.P. and later with the Victorian Railways and the Melbourne Metropolitan Board of Works where he served in a number of major departments.[3]

During World War Two he was Chief Civilian Consultant on engineering works for the United States Army, and later Assistant Business Adviser on technical and administrative matters for the Australian Army.[4]

In 1945 Stohr became Engineer-in Chief for the Ballarat Water Commissioners and the Ballarat Sewerage Authority. As Principal technician and Executive Officer he was responsible for a wide array of Engineering services and developmental activities of the commission until his retirement on 20 February 1970.[5]

For 25 years Albert Stohr represented the provincial Sewerage Authorities of Victoria on the Plumbers & Gasfitters Registration Board and was Vice-Chairman for five years,[6]

In 1970 A.E. Stohr became a member of the Executive of the technical Schools' Association of Victoria, and in 1971 was elected Vice-president. [7]

Bert Stohr was Engineer-in-Chief of the White Swan Reservoir, a major reservoir in the Ballarat water supply system. He investigated, planned, designed and constructed the White Swan reservoir which was completed in 1951 at a cost of 1.300,000 pounds. he also was responsible for the new spillway at Gong Gong Reservoir, Venturi meters and booster pumps at Control point, Brown Hill, construction of a 24-inch main to Ballarat North from White Swan Reservoir, new sewerage treatment works at Wendouree and considerable extensions tot eh sewerage reticulation system., [10]

In August 1959 Stohr was awarded the degree of Master of Engineering from the University of Melbourne for the thesis, Water Supply to Ballarat and District with special reference to the White Swan Reservoir Project. [11]

Stohr was a member of the Rotary Club of Ballarat for 25 years. During that time he served as President, and Chairman of many major committees.[12]

Death of Cr. A.E. Stohr
The Chairman referred to the death of the late Cr Stohr and a period of silence was observed. Council agreed to record a minute of appreciation concerning Cr Stohr's service tot eh College. The following motion was agreed to:-

That this Council expresses its sincere regret in learning of the death, on 18th June, 1976, of Cr. A.E. Stohr and records its deep appreciation for the great contribution he made in time, experience and advice to the Council and committees of the School of Mines and Industries Ballarat.
His participation and friendly presence are greatly missed.
Cr Stohr's close association with education in Ballarat commenced when he became a member of the School of Miens Council on 18th June, 1947. He became Vice-President of the Council on 24th February, 1960 and occupied that office at the time of his death. He was from time to time a member of practically all major committees of the School of Mines and chairman of several.
He was appointed as the School's representative on the Technical Schools association of Victoria and in due course represented the whole of the Ballarat region on the executive and became Vice President. He was also Chairman of the Ballarat/Horsham Regional Council for technical Education and a member of the Ballarat Apprenticeship Advisory Committee.
From its inception he was a member of the Joint Committee that represented both BIAE [Ballarat Institute of Advanced Education] and and SCVB [State College of Victoria, Ballarat] in the planning of the merger that formed BCAE. (Ballarat College of Advanced Education.
"Cr Stohr's higher degree qualifications in engineering, his experience in senior administrative posts in Ballarat and elsewhere, and his broad range of interests and contacts enabled him to make a similar contribution in all of the ... [text missing]
Council also agreed that the Chairman write to Mrs Stohr advising her of Council's action. It was also agreed on the motion of Crs Hollioake and Tippett that Cr Barker be authorised to discuss with the Ballarat Courier the matter of a report being published referring to the services provided to the School by Mr Stohr.[13]

Ballarat Water Commissioners
5th February, 1970
Mr A.E. Stohr
1519 Sturt Street
Ballarat. Vic. 3350
Dear Mr Stohr.
At a meeting held on 4th February, 1970, which you attended for the last time as Engineer-in-Chief of the Commission and Authority, it was decided to express sincere thanks and appreciation for the conscientious and efficient service you have rendered over the past 25 years.
You have been appreciated for your wise and courteous guidance and it is largely because of your personality and ability that the numerous projects undertaken have gone ahead so smoothly.
We were pleased to know that in August, 1959, you were awarded the Degree of master of Engineering in the University of Melbourne for a Thesis - "Water Supply to Ballarat and District with special reference to the White Swan Reservoir Project".
Your unselfish service and your understanding of all employees have made you a popular and valuable member of our staff and, to honour your retirement, a complimentary dinners is being held to express appreciation for the contribution you have made to the development of water and sewerage facilities, together with your numerous community activities.
The Chairman (Sir Arthur Nicholson), Commissioners and all employees with to express to you their sincere thanks and best wishes and it is hoped that the future for you and Mrs Stohr will include good health and happiness so that you enjoy your retirement to the utmost.
We are sorry the time has come for you to retire, but pleased to know that you are prepared to make your consultative services available during the next twelve months, when called upon.
In witness whereof the Common Seal of The Ballarat Water Commissioners is hereto set and affixed at Ballarat this fifth day of February in the year one thousand nine hundred and seventy.
Sir John W. Nicholson, Chairman
M.C. Brown, Commissioner
[Chas Cloyn?], Secretary