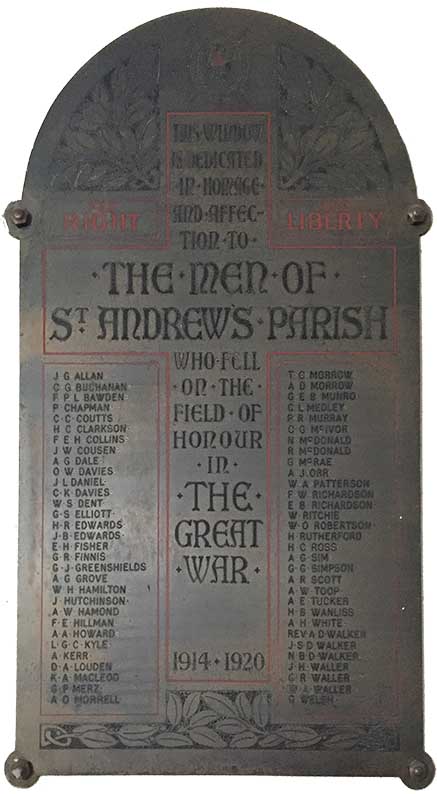 World War One Honour Board at St Andrew's Kirk, Ballarat for those who died as the result of war, Ballarat Heritage Services Picture Collections

Alexander Henry (Alick) White was born on 09 May 1882, the son of Alexander White and Eliza Collison. He was educated at Ballarat's Grenville College. He served during the Boer War in the 1899 Victorian Mounted Rifles. White was a maltster with Joe White Maltings Ltd he married Myrtle Louise Glasson.[1]

White enlisted into the AIF on 05 September 1914. During World War One he served in the 8th Light Horse as a Lieutenant-Colonel.[2] He received a shrapnel wound to the scalp at Gallipoli on 27 June 1815, and returned to duty a week later. White was listed as 'missing' on 07 August 1915, and found to be dead by a Board of Enquiry. The following day he was reported as killed in action. A special mention by Sir Ian Hamilton was made in dispatches of 26 August 1915. [3] The Old Colonists' Club minutes reported that Alex. H. White had found a soldiers grave at Gallipoli.[4]

Colonel White was killed by machine gun fire at Walker's Ridge, Gallipoli. Attempts to recover his body proved to be too dangerous and they were ordered to give up the attempt. [5]

Tree number 505 in the Ballarat Avenue of Honour was planted for Alexander White by his wife Mrs Myrtle Loiuse White.[6]

A.H. White is listed on the honour board of the Old Colonists' Club Ballarat, and the Ballarat Yacht Club Honor Roll.

Colonel Alick White is commemorated on the Lone Pine Memorial, and was posthumously mentioned in dispatched, [7]