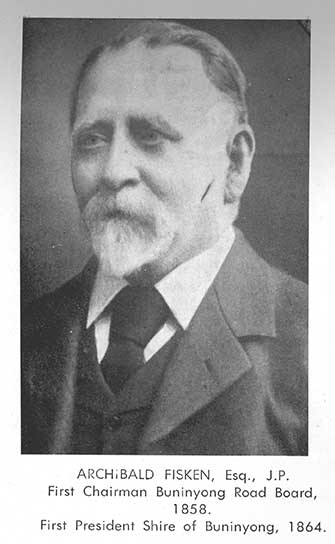 MARRIAGE. On the 4th instant, at Saint Paul's Church, Melbourne, by the Rev. Mr. Burdin, Archibald Fisken, Esq., of Lal Lal, near Ballaarat, to Charlotte Emily, second daughter of the Hon. John Macnamara. M.L.C. of Sydney.[3]

They had a number of children including:

He was president of the Ballarat and Buninyong United Caledonian Society in 1882.

His obituary in the Argus in 1907 gave full details of his life:

DEATH OF MR. ARCHIBALD FISKEN. A PASTORAL PIONEER. The very many friends of Mr. Archibald Fisken will learn with deep regret of his death. Mr Fisken was 78 years of age, and some time ago became a sufferer from a very painful complaint. His condition, unhappily, did not improve, and about a fortnight ago Dr. G A. Syme found that an operation was imperative. The operation was entirely successful, but the general condition of the patient's health was unsatisfactory. For a time it was hoped that he would regain his strength but unhappily the anticipations were not realised. He gradually became weaker, and died yesterday morning.

Mr. Fisken was one of the survivors of the pastoral pioneers of the forties. He was born in Glasgow on August 27, 1829. His father was Archibald Fisken, of Bothwell, Scotland. In April, 1840, with his parents and family, Mr Fisken came out to the settlement of Port Phillip, the beginning of the state of Victoria. With the Fisken family came the late Peter Inglis, of Ingliston, an uncle of Mr. Fisken. Melbourne was then a bush village, covering only a small fraction of the space now occupied by the city, and Prahran and St. Kilda were separated from Melbourne by scrub, in which it was not an uncommon thing for residents in the "suburbs" to lose their way. His education had been commenced at Bothwell before he left Scotland. In early Melbourne the leading school was the Scots School, on Collins-street Hill, where George and George's warehouse now stand. There he went to school for a year, and then, Sir Peter Inglis having bought Ingliston Station, between Bacchus Marsh and Ballan, from the late Mr. Campbell, young Fisken went up on to the station with his uncle. A private tutor was engaged, and the boy continued his studies with him for some time. A few years later he returned to Melbourne, and completed his education under the Rev. Alex. Morrison, who was minister of an Independent Church in Collins-street, and no relation of Dr Alexander Morrison, who ruled at the Scotch College.

It was in 1846, when he was 17 years of age that he entered on his career as a grazier. In 1842 or 1843 Mr Inglis had purchased Warrenheip station, near Ballarat, and in 1846 he bought the adjoining run of Lal Lal. Young Mr. Fisken was placed in charge of these two stations, on which cattle were being grazed. At a later date, while still under his management, these two runs mustered 6,000 head of cattle. The Ballarat district, afterwards to become famous, was then but little known. Dense scrub covered the country, great thickets of native hop being matted amongst the ordinary bush timber, and rendering passage through it unusually difficult. Round Warrenheip and Bullarook there were no roads, and the forests were exceptionally dense and difficult to penetrate. No man had ever driven a vehicle through. The few who had traveled through the district had done so on foot or on horseback. Mr. Fisken, even at 17 years of age, was a splendid whip, and to him belonged the honour of having been the first person to drive through. In 1846 accompanied by Mr. William Taylor, he drove a tandem team in a dogcart through the forest country to Longerenong, on the Wimmera. Mr. Fisken was one of the few men who remembered Ballarat as it was before the diggers found it. The Warrenheip run embraced a large part of what is now Ballarat East. Wild animals were plentiful, and many a time Mr. Fisken hunted kangaroos over the ground now occupied by Ballarat's principal streets and finest buildings. Ballarat West was a stretch of well-timbered grassy country. Main and Bridge streets were primeval forest. Sturt and Lydiard streets were wattle groves.

When the gold rush occurred Mr. Fisken was one of the first people affected. Gold was discovered on a portion of the Warrenheip run. There was an enormous influx of people to Ballarat. Men ran away from their ships in Hobson's Bay, so great was the fever. Needless to say, all Mr. Fisken's station hands deserted him, and joined the diggers in the search for gold. He was left with two stations, well stocked with cattle, and no one to help in their management but a few of his friends. Still he managed to keep everything in good order, and was able about that time to purchase both stations from his uncle. The crowds of diggers in the Ballarat district had to be fed, and Mr Fisken found right at the back-door of his stations a ready market for his cattle. The diggers on their way to Ballarat passed through Mr. Fisken's runs, and be was able to make a considerable fortune out of the sale of cattle to them.

The throwing open of the land for selection caused Mr. Fisken after years of hard work to lose most of his station property. It was all selected, with the exception of about 10,000 acres, of which he had bought the freehold at auction. This formed his famous Lal Lal estate, on which be built a splendid homestead, near Yendon, though the old slab hut which he occupied when he first took charge of the run in 1846 still stands there as a monument of the pluck and the perseverance of the old pioneers. Lal Lal is now leased to Mr. Fisken's eldest son.

Governor Latrobe appointed Mr. Fisken a justice of the peace. He has held many public offices, and discharged the functions of all of them with credit. He was one of the first returning-officers for North Grant, and was for many years returning-officer for Ballarat East. When the Buninyong Road Board was formed in 1850 Mr. Fisken was away on a visit to Sydney, but so great was the estimation in which he was held in the district that, though absent, he was elected a member, and unanimously appointed chairman. When Buninyong became a shire he was elected a member of the council, a position which he retained for a great many years, during which he was frequently elected president. He always took a keen interest in agricultural matters, and was one of the founders of the Ballarat Agricultural Society, and was president of it for a year. He was also for many years a member of the council of the Royal Agricultural Society. His knowledge of cattle was profound, and he had few equals in the state as an expert on questions of breeding. So much was his knowledge appreciated that the late Sir Samuel Wilson appointed him manager of his properties in Australia, and Mr Fisken controlled Sir Samuel Wilson's famous cattle stud for many years. Mr. Fisken was the founder of the firm of Fisken, Valentine, and Co., stock and station agents in Ballarat. In 1877 he was appointed by the Berry Administration commissioner of the Land Tax, with Judge Trench and Mr. Skene, surveyor-general. It was their duty to hear appeals against classifications under the Land Tax Act, and their work lasted for two or three years. Mr. Fisken took up his residence in in Melbourne about 30 years ago, and was a prominent member of the Melbourne and Australia clubs. In church matters, Mr. Fisken was a staunch Presbyterian, and during his long residence in Melbourne was a member of Scots Church. For some years he was senior trustee of the church property.

In July, 1860, he married Miss Charlotte Emily Macnamara, second daughter of Mr John Macnamara, of Sydney, who survives him, as do three sons— Archibald, who is the present lessee of Lal Lal; John of Fisken, Reed, and Co., Melbourne; and Cecil — and three daughters.

The funeral will leave "Coorabor," Orrong-road, at half-past 2 o'clock this afternoon, the carriages falling into line in Toorak-road, and proceed to Melbourne General Cemetery, passing over Prince's bridge at quarter-past 3 o'clock. The funeral arrangements are in the hands of A. A. Sleight of Collins street.[12]

The Fisken home, Lal Lal Park, is still in existence.