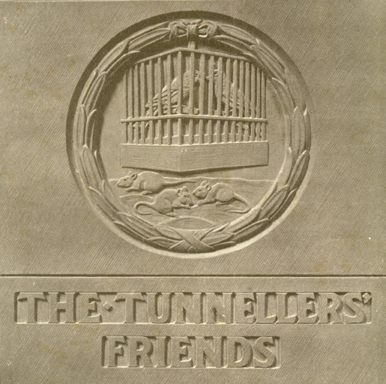 The Tunnellers' Friend from the Scottish War Memorial, Edinburgh.[1]

Tunnelling Companies and Schools of Mines

The AIF targeted men who had been trained at Schools of Mines, or who had worked in mines, to work in the Australian Mining Corps.

Photographs of Corporal R. Sergeant and Sergeant H. Dixon, with a group of the officers and the Miners' Corps, among whom are several School of Mines students, have been hung in the Common Room at the School. The group was represented by Professor Mica Smith. [2]

Among the men who enlisted at Ballarat last week for the Miners and Engineers' Corps are two whose certificates have been regarded by Major Councman as worthy of special consideration by the defence department. The first of these is Pte J. T. Ryan, a man of splendid physique, whose three sons enlisted a considerable time ago, two of them being still on service in France. Pte Ryan has had considerable experience in mining, His Credentials are excellent, and the certificate issued to him by Mjr Couchman is marked "specially qualified." he leaves for camp on Wednesday next. The other recruit is Pte C. C. Brittain, who having completed a successful course of three years at the local School of Mines and two years practical experience at the establishment of Ronaldson and Tippett, is well qualified for the work of the Engineers' Corps. He also is among those listed as "specially qualified". He is the third son of Mr J. Brittain to volunteer his services to the Empire. Pte H. Brittain has fallen on the field of fame. The other, Pte C. A. Brittain, is now in France. [3]

In the first week of November, the 1st Australian Tunnelling Company relieved the Canadians on the Hill 60 front.
The two mines had been intended for immediate firing, but the change of policy meant that they would not be fired for some time to come. It was then decided to sink a vertical steel-lined shaft to replace the long incline, as the latter was more likely to be put out of action than a vertical one.
Started by the Canadians just before leaving, the Berlin Shaft, as it was termed, 6 feet in diameter, was sunk to 94 feet deep by the Australians, and from the bottom a gallery was driven to the foot of the incline. Along this all the water was drained back to a large sump and pumped up the shaft by power. The new shaft effected a great saving in labour and also greatly improved the ventilation, which had continuously been bad, From this shaft also, a deep level defensive system was put in, and an offensive gallery pushed out towards a strong point called the Snout, but lack of time prevented its completion[4]

Enlistments in 1st Australian Tunnelling Company from Ballarat and Surroundings

Hill 63 was constructed by the 1st Australian Tunnelling Company, who gave it the name Wallangarra. It was a series of chambers with connecting galleries, exits and entrances. It;s chief claim to fame was that it was officially declared open, and the Army Commander performed the opening ceremony.

Little bunches of gaily coloured bunting relived the sombre green in the triumphal arch. Nor was the sawdust a symbol only - it was a necessity - a liberal application was essential to mop up water and conceal the mud on the floor of the entrance.
A band helped to enliven the proceedings, and with the presence of no less than twenty generals and their staffs ensured that the function was not lacking in dignity. ... Fortunately the ceremony passed off without any molestation from the enemy. Had a searching gun got busy, then promotion would have been accelerated. [5]

Enlistments in the 2nd Australian Tunnelling Company from Ballarat and Surroundings

Enlistments in the 3rd Australian Tunnelling Company from Ballarat and Surroundings

Enlistments in the 4th Australian Tunnelling Company from Ballarat and Surroundings

Enlistments in the 5th Australian Tunnelling Company from Ballarat and Surroundings

Enlistments from Ballarat and Surroundings