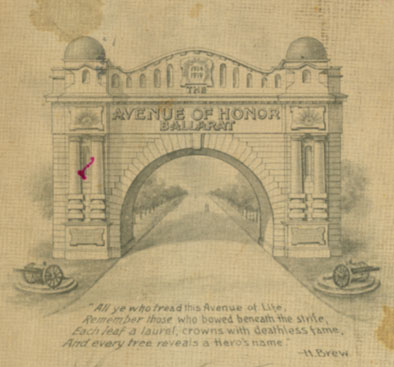 The official entrance to the Ballarat Avenue of Honour, despite its name the Arch is actually a memorial arch rather than a triumphal arch (as the use of the word Victory would imply) - it does not record the victories and generals of World War One but implores us to remember the Ballarat and district men and women who served to keep the world safe and peaceful for us all. 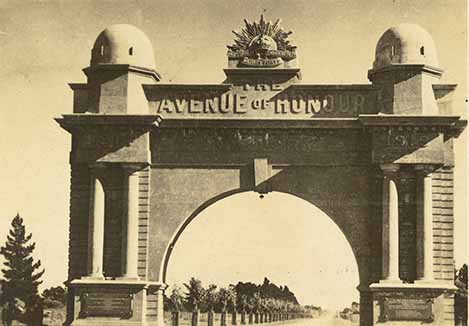 General Sir William Birdwood laid the foundation-stone for the Victory Arch on Saturday 7 February 1920[Notes 3] - also presenting a number of decorations to returned service men and women.[2] Local bricklayer George Brookes and his team then worked for just over three months to lay 70,000 bricks.[3] Only four months after the foundation stone was laid, on Wednesday 2 June, amidst heavy rain a dense crowd watched as the Arch was officially "opened" by the visiting Prince of Wales[4] - the 600 Lucas Girls in pride of place on special tiers erected directly beside the Arch.[5]

In 2011 restoration works to the value of $810,000 were undertaken on the Arch of Victory - with some 800 people turning out on 5 November 2011 to see Governor-General Quentin Bryce cut the ribbon.[7]

The students are busy making models and working out my design for a proposed entrance to the Avenue of Honor. It is intended to make a large scale model about 18' x 12' and place sane on view in a show window in Sturt Street about the moddle of next month. The work has been undertaken at the request of Lucas and Co.[8]

At the special request of Lucas and Co who waited upon me some time ago, I undertook on behalf od the School, to prepare a design and models for the Avenue of Honour Entrance. The design completion was inspected by the Proprietors and girls, who expressed approval of it, but as it was felt by some of them that before commencing same, it might be well to get some other designs and estimates, I suggested that a public competition be held and the best possble judges secured. This being agreed to designs were sent in. Messres Lucas and Co made all the arrangements for the judging and paid two representatives niminated by the Institute of Architects to come to Ballt and make the award, which they did in a flattering repost in favour of the Schools design. This in view of the fair and open attitude taken by the school in very satisfactory to all concerned, but as Mrs Thompson considerd it no sufficiently impressive and freakish enough, and her own design and on of the other superiors, and has decided that a vote of the girls will decide which shall be erected. I am afraid there is little chance of the Schools design being carried out, but a very big chance of an inartistic monstrousity being thrust upon the public for all time resulting from sucn incompetant and immature judgement. Personally I feel the Council and public bodies who have contributed to the Avenue should enter a protest.[9]