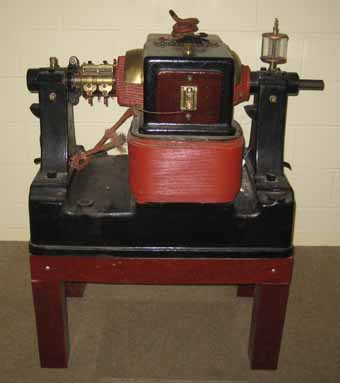 The patented generator was made by Elwell-Parker Ltd of Wolverhampton. In October 1882 Paul Elwell went into partnership with Thomas Parker to form an electrical manufacturing business. The new company was located in Wolverhampton, and in the 1880s dynamos were added to the product range. The electrical department consisted on Thomas Parker, one of his sons and a man. In 1883 Elwell-Parker designed, built and installed dynamos and electric lighting for Trafalgar Collieries at Dean. The early underground installation is thought to be the first in London if not the world. [1] 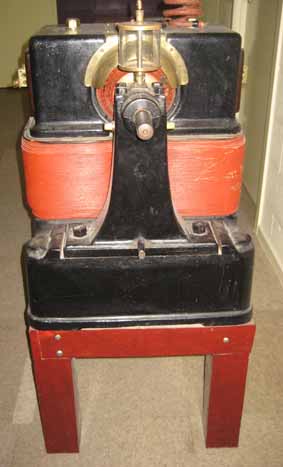 This AC generator operated for the State Electricity Commission in the Ballarat North Power Station prior to World War Two. [2]

James Oddie of Ballarat has an association with Thomas Parker of Elswell-Parker. In early 1887 Oddie arrived in England seeking information on electrical knowledge and its developments. At this time Henry Sutton was teaching Electricity and Magnetism at the Ballarat School of Mines. Oddie stayed in the United Kingdom for around three years and during that time became a close friend of Thomas Parker and his family. The two first met at the first official running of the Blackpool tram, and Oddie was invited to visit Parker at Wolverhampton. Over the years Thomas Parker kept newspaper cuttings (mainly Australian) relating to James Oddie and his work.[3]

The following article is a description of the Wolverhampton works by James Oddie, and was collected by Thomas Parker. After the dinner at Blackpool, Mr. Parker visited me, and cordially invited me to see his extensive works at Wolverhampton, an invitation I was not slow to avail myself of. This was the keynote of the best friendship I made in England. I went shortly afterwards and stayed several days, visiting the works daily, as Mr. Parker gave me the run of the whole works. There I ordered the installation of a 60 light dynamo, with a 28 cell storage battery and paraphernalia, now doing duty at the Observatory. I subsequently visited the works frequently, sometimes for a week at a time, and I regard it as the brightest spot in my English constellation. Mr. Parker started his works in 1880, with one man beside himself. He never had a single day’s instruction in electricity in his life; now he daily instructs between 300 and 400 employees, who worship him as a father. He is said to be now the most practical electrical engineer and mechanist in Europe. During one of my visits I took with me an artist, who is painting for me a portrait, 6 feet by 5 feet, of Mr. Parker, surrounded by dynamos, secondary batteries, measuring instruments etc. Electric tram cars are going to be a big thing in England. Parker’s Company Limited, is now, with three other companies, in the hands of the Electric Construction Company, with Mr. Parker as manager of the lot. The whole of the works will be taken to Wolverhampton. Before I left, a tender for £50,000 was accepted for the construction of new works. [4]