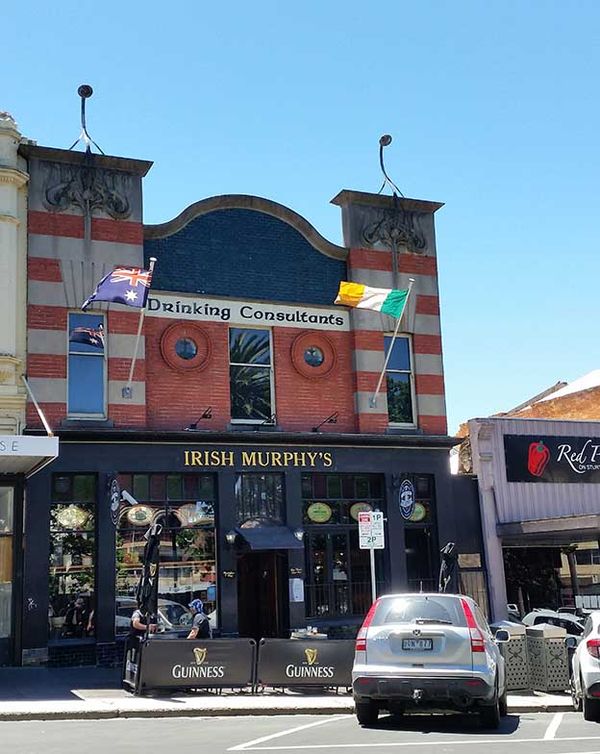 For hotels with the same or similar names, see Camp Hotel.

The original hotel was erected in 1861 by G. Armstrong.[1] It is now known as Murphy's Bar and Restaurant.

The two-storey brick structure is on a site near the original police camp which was established in the gold rush days.

The sale was made by Messrs. Thiessen and Irvine, of Ballarat, under instructions from the executors of the estate of the late Mrs. Martha Lauder. The buyers were Mr. William Liston and family, of Beaufort.[2]

The Camp Hotel is in Sturt Street. The site was originally the site of the Little Engine Mine.[1] In 1988 it was numbered 36-38 Sturt Street.[3] It is now numbered as 36 Sturt Street.

In 1925 the hotel produced a Ballarat Football League football fixtures card. One of the cards is in the collection of the Federation University, Ballarat, registration no. 02376. It is a double sided card with black and white printing and coloured borders. It advertises the hotel owned by Mrs F. Young.[4] 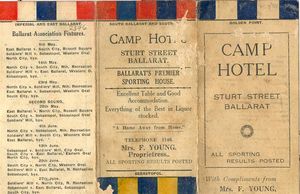 In February 1866 the hotel was used as a venue by mine directors to discuss reducing miners' wages.[5]

In November 1890, the publican was fined for setting up a betting room for the Melbourne Cup.[6]

The existing hotel building was designed by architect P. S. Richards, and erected in 1907.[1]