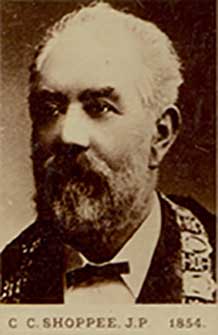 Charles Shoppee was a veteran of the Crimean War and Indian Mutiny.[2] he arrived in Sydney in April 1855, and the Ballarat district on 14 July 1855 where he first dug for gold at Black Hill Flat.

EUREKA STOCKADE RELICS - A relic of the encounter that took place at the Eureka Stockade on December 3, 1854, between British soldiers and Ballarat gold diggers was (says the " Age" of March 1) on Saturday discovered by a fossicker in the vicinity of the stockade. It is in the shape of a military scabbard, 3 1/2ft. in length. The relic, which has been badly affected by rust, having been embedded in the earth for some 54 years, belonged apparently to an officer of the 40th regiment, which, with the 12th regiment and a party of men of war from a ship then lying in Hobson's Bay, was engaged in the work of storming the stockade. It is curved and weighs about 2 lb. A Melbourne antiquarian is desirous of purchasing the scabbard which is on view at a shop in the Main-Road. Mr. C. C. Shoppee, superintendent of the Ballarat Benevolent, Asylum, has in his possession an insurgent's pistol, found in an old hole inside the stockade many years subsequent to the armed revolt of the diggers. Some time ago a wealthy pioneer offered £10 for this old-fashioned pistol.[5]

As reminiscent of the late Mr. Shoppee, of Ballarat, a favorite saying of his was - "Fear God, honor the King, fight hard, and you can't very well go wrong." To no man would he yield the palm for loyalty; to no man would he surrender the love of battle when he believed the cause that he espoused to be right. His love of loyalty is shown in the following little anecdote of an inmate, who had long lived under the sheltering wing of the Ballarat Benevolent Asylum. In his day he had fought gallantly for his country in the Crimean war, and Indian Mutiny, but old age and bad times had come upon him and forced him to seek refuge at the institution. On certain occasions the old soldier would show signs of restlessness and an unmistakable desire to "fight his battle o'er again," but in order that they should be the more realistic it was absolutely necessary "to have a few beers." At these times he would march from his quarters to the master's office, draw himself proudly up to his full height and solemnly salute. '"Well, what it is now ?" Mr. Shop pee would sternly ask. " I want to go to the grocer's, sir," was the veteran's reply. "T'he grocer's!" and the Superin tendent, with a chuckle, would jerk his thumb over his shoulder in the direc tion of the nearest public-house. "Right, sir. I cannot lie." "You fought for your Queen and country ?" "I did, sir. " "Very well, here's a shilling to drink the King's health, but-ah, well you are, loyal, anyhow." It is pleasant to remember Mr. Shoppee as he was, a fine stamp of the British race, a man of the " Bull Dog" breed, whose tenacity, was phe nomenal, whose energy was unbounded, and whose loyalty was unimpeachable.[6]

A MELBOURNE TRIBUTE.
FINE CITIZEN MOURNED.
Ballarat has lost one of Its greatest citizens in the death of Cr W. D. Hill — the soul of South street. “South Street” is known throughout Australasia and overseas because of his purposeful life and labors. Living quietly and unostentatiously, seeking neither fame nor monetary rewards, Cr Hill has done more to develop pubic interest in the liberal arts than any group of citizens who could be mentioned.' It is but bare justice to his services to say that his native city has benefited incalculably by his inspirations, his industry, his optimism, and hs unwearying public spiritedness. No Ballarat citizen is more widely known — none was ever more modest and unassuming. Three times Mayor, the first to preside over united Ballarat, an active worker in every public institution, energetic in pursuit of charitable movements, he has a most enviable record of good citizenship. With the names of two other citizens who served the city before themselves, Frederick Moses Claxton, to whom the place owes its lake and gardens, and Charles Collett Shoppee, whose passion for civic improvement has left enduring monuments, must be bracketed that of William Duguid Hill, the greatest of them all.[7]