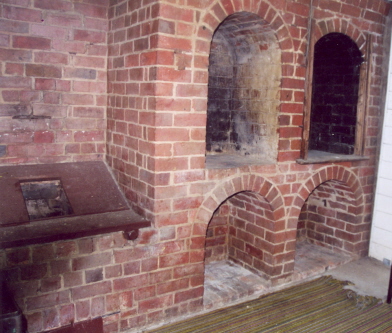 Remains of Assay Furnaces at the Clunes School of Mines, Federation University Historical Collection (Cat. No. 5563)

The Clunes School of Mines was a campus of the Ballarat School of Mines. It was established in 1890. The building is a simple carpenter Gothic gabled building constructed in 1892.[1]

Clunes School of Mines
Opening of the New Building

The ceremony of declaring open for use and occupation educationally of the new building of the School of Mines locally, took place on Friday evening at the Town Hall. At its last quarterly meeting the council of the school decided upon appropriately observing the occasion, and arrangements made for that purpose were carried out to effect on the meeting in question. The celebration took the form of a public meeting, for which so lengthy a programme had been prepared that had it been carried out in its entirety would have occupied until midnight ...

... the secretary of the local school (Mr H.E. Sando); the President of the Clunes School of Mines, of course, presiding as chairman. ...

At the opening of the Clunes School of Mines Mr Burbidge, after a few preliminary remarks, then delivered a lecture on Metallurgy, illustrated with typical samples. He adverted to the principles upon which a knowledge of science was applied; dealt with the antiquity of the same, its rise and progress; introduced a variety of instances of the benefits attaching thereto, together with allusions to the various processes of treatment for the extraction of metals from the ores, &c; the whole being interspersed with appropriate references to the desirability, especially in a mining community, of gaining such practical knowledge as was available by all joining the classes of the School of Mines. The remarks of the lecturer were frequently interrupted with applause, which was very pronounces on its conclusion.[2]

Harry E. Sando, Secretary of the Clunes School of Mines.[5]