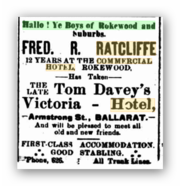 This hotel was also known as the Victoria Hotel in 1914. In 1914 the Ballarat Star referred to it as Ratcliffe's Commercial Hotel, the same report in the Ballarat Courier called it the Victoria.[1]

In May 1857, the publican Joseph Tait advertised the benefits of the hotel:

COMMERCIAL HOTEL. Armstrong-street, Township of Ballarat. JOSEPH TAIT, in returning thanks to his friends for their patronage and support since he has been in business, begs to inform them, and the public generally, that he is conducting the business of the above Hotel solely on his own account, and at the same time to solicit future favors. The Hotel has been greatly improved, and undergone thorough repair, and is now replete with every accommodation that can be required. The wines, spirits, and other liquors are of the best quality, and the accommodation for boarders is equal to any in Ballarat. J. T. hopes that his endeavors to please his friends, and the public, will ensure him a continuance of their support, as no pains will be spared to give entire satisfaction to all. An Ordinary every day, at One o'clock. Board 30s. per week.[2]

In December 1914 the police unsuccessfully opposed the renewal of the publican's license:

Inspector Sampson in opening the case against Ratcliffe's Commercial Hotel, said the house was not conducted in accordance with the provisions of the Licensing Act. Street betting was rampant in Ballarat and the men crowded into the hotels for cover. Ratcliffe's Hotel was a place which had been particularly identified with that kind of thing. Some opposition had been shown to the police by Mr Ratcliffe, whose attitude was such that they could not be assured that the practice of permitting betting on the premises would be stopped Sergeant Nicholson stated that he had frequently visited the hotel. He had seen betting men about the premises. One day, when he visited the hotel he saw some street betters in a right of way near the hotel, but as soon as they saw the police they went into the hotel. Another day when he went to the hotel, he saw a drunken man lying on the sofa in the hotel.The police always had some difficulty in seeing Mr Ratcliffe. When he first saw Mr. Ratcliffe and warned him of the betting men frequenting the premises, he professed ignorance of the state of affairs. Mr Ratclifle did not take notice of the warning, and later when he visited the hotel again, street betters were about the place.

To Mr Coldham — Mr Ratcliffe could not stop men from being in the right of way. If Mr Ratcliffe did not encourage street betters, they would not frequent the hotel.Detective-Sergeant Rogerson deposed that he had been watching the hotel.On Derby Day there was some twenty or thirty people in front of the hotel, but when they saw him coming they made off into the hotel. He had frequently seen crowds of men who frequented racecourses, hanging about the premises. He had seen one reputed bookmaker in front of the hotel. To Mr Coldham — He had not seen any bookmaking in the hotel. Constable O'Brien stated that on the occasions of the Melbourne and Williamstown Cups and other Melbourne races he had watched the hotel for several hours at a time, and had seen reputed bookmakers entering and leaving the hotel. One day when standing in front of the hotel he heard a man say to a reputed bookmaker, "How are the odds to-day?' but as the bookmaker saw witness he did not reply, but went into the hotel. He had seen 'spotters' about the premises. Several times a man who was engaged as a 'spotter' gave warning to his associates when witness was approaching, and they then entered the hotel. To Mr Coldham — He would not say the 'spotters' were employed by Mr Ratcliffe. Plainclothes-Constable Craig deposed to warning the licensee about betting on the premises. Up to the time he warned Mr Ratcliffe he was frequently in the presence of reputed bookmakers, but subsequently the licensee was more cautious in picking his associates. Whenever he visited the hotel there were crowds of men sitting in the parlor and the bar. Nearly every Saturday afternoon there were reputed bookmakers and street betters in front of and about the hotel.

Inspector Sampson, also gave evidence. Despite repeated warnings, Mr Ratcliffe had failed to conduct his business in the way he should. Mr. Coldham said there was no direct evidence that the men who frequented the hotel were betting men. It was only supposition on the part of the police. His Honor— Yes, but these men must have a place of refuge when the police come on the scene. Mr. Coldham maintained that the evidence was only suspicious. His Honor said the court did not think there was sufficient evidence on which to refuse the renewal of the license. Speaking for himself, he had very grave doubts about the conduct of the hotel. It was absurd to think that the landlord was not aware of the doings of persons constantly around his hotel. He thought the licensee knew perfectly well what was going on. It was nonsense to say he could not stop betting people going into the hotel. He hoped the case would have an effect on the conduct of the house in the future. Messrs Rohan and Berryman also concurred with this view, it being remarked that the police had the done right in bringing the matter before the court. The case was very suspicious.[3]

The Commercial Hotel was in Armstrong Street.[4]