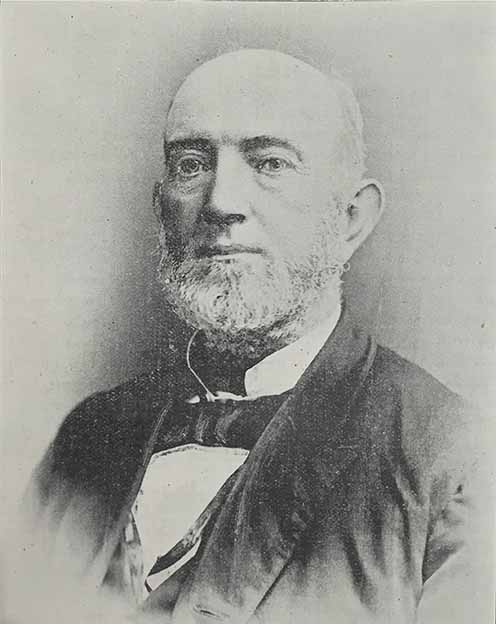 Daniel Brophy was born on 13 November 1832 at Castlecomer (County Kilkenny, Ireland)[1] to farmer William Brophy and Margaret nee Purcell.[2] Daniel Brophy left Ireland in 1847 on board the Abbotsford.[3]. [4]

Daniel Brophy was a Director of the Phoenix Foundry. He was chairman of the board of directors for a period, at least, encompassing 1883 to 1889.[6] He was also a Mining Manager, Mining Investor and hotel keeper.[7] In 1882 he advertised Brophy's Hotel.

Brophy was Mayor of the City of Ballarat from 1875-6 and as such was the ex-officio member of the Ballarat School of Mines Council. He was involved in the establishment of the Ballarat City Rowing Club, along with J. W. Graham, Henry R. Caselli and Peter Cazaly.[8]

He was a Knight of the Order of St. Gregory the Great and a Count of the Holy Roman Empire,[9] and a member of the Old Colonists' Association, Ballarat. 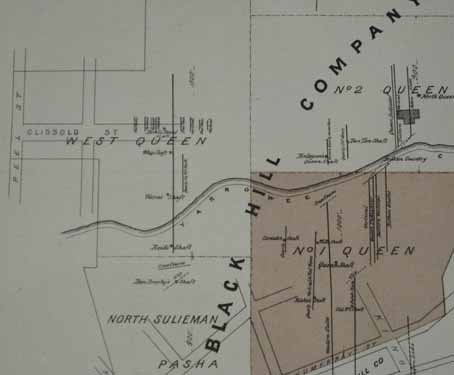 Plan of the Black Hill Company [detail]. Dan Brophy's Shaft is shown to the left of the letter 'C' in 'Black Hill',University of Ballarat Historical Collection (Cat. No. 2532)

Our respected townsman, Mr. D. Brophy, K.G.G., returned to Ballarat after a visit of ten months to the home country. The trip appears to have benefited him very much, as he looks hale and hearty. He was warmly welcomed by his friends, prominent among whom were his Worship the Mayor of the town, Mr. Edward Murphy, M.L.A., and Mr J. J. Fitzgerald, J.P. He was interviewed by a reporter of the Star, who gives a very interesting report of same. Mr. Brophy, during- his visit, had an interview with his Holiness the Pope, who received him very kindly, and asked him many questions about Australia, a part of the globe in which his Holiness evinces a deep interest. While Mr. Brophy was in the home country he had an opportunity of being present at two byelections — Elgin and Nairne, and Peterborough—where he found the farmers and artisans in favour of Home Rule for Ireland. He attended several radical meetings in London, at which all the speakers agreed that every other question should be left aside until this question was decided. Mr. Brophy is of opinion that if there was a general election to-morrow the Unionist-Liberals would be " wiped out." He also was presentat a meeting of the Great Liberal Club in London, where the question was put as to how the move for Home Bule would be affected by the death or retirement of either Mr. Gladstone or Mr. Parnell, or both? The answer was given that the question now was not one of leaders or of men, but of doing justice to Ireland. Mr. Brophy had an interview with Cardinal Manning with reference to the dockers' strike, but his Eminence did not express any decided opinion in respect to it— his sole aim was to make peace, that the working men very very poor, and that what they were fighting for was not too much. The Cardinal said that Mr. Burns and the other leaders were honourable and good men. Before leaving, his Eminence, who evinced a great interest in Australia, presented Mr. Brophy with a copy of a little work by himself, " Confidence in God," with his autograph. While in Dublin he attended a Land League meeting, where he was called upon to speak. He also was present at a conference at Thurles, where the first organisation of the new Tenants' Defence Fund took place. It was orderly and enthusiastic. Everywhere he went he found the Irish people quiet and contented, and full of confidence in the Liberal party in England getting them what they wanted. He went through Luggercurren, County Tipperary, where is the Smith-Barry estate, in which evictions had lately been carried out. He also was present at the trial of Fr. Dwyer and others at Middleton. At this place he saw a young man, who had apparently done nothing, jostled against by two constables, and pitched into the street on his hands and knees. Down in Tipperary, where all the evictions had recently taken place, he never saw anything approaching to rowdyism. On many estates there, as well as elsewhere, be saw houses built and in course of erection for the evicted tenants out of the funds which were collected by Mr. Dillon on his late visit to Australia. During his visit Mr. Brophy Baw Mr. William O'Brien in the Galway prison, whom he describes as a very quiet, gentlemanly man. He also had the pleasure of seeing that true patriot, Michael Davitt, who presented him with a copy of his latest work.[24]