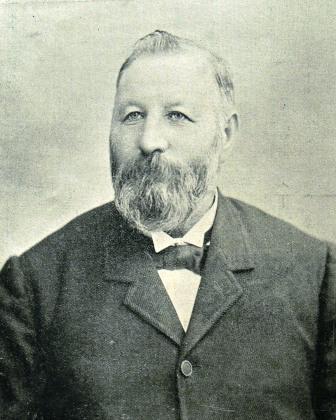 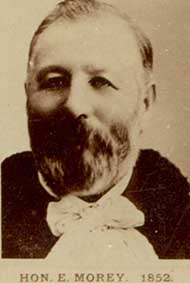 He was a director of the Phoenix Foundry and the Ballarat Woollen and Worsted Mill.

Having served about 8 years in the Merchant Navy, from his apprenticeship at age 13.[2] After serving has apprenticeship he travelled to Hobart and lived there for 3 months. [3]

Edward emigrated to Australia on board the SS Sir Walter Scott in 1853 – his port of arrival being Adelaide.[4]

He was a witness to the Eureka Stockade.

In October 1876 he headed a new syndicate for the New Australasian Mine, Creswick.[6]

Edward Morey was a Director of the Last Chance Co., Queen’s Jubilee Co., Rothschild Co., New Koh-i-Noor Co., Northern Star Co., and the Prince of Wales and Bonshaw Co. in 1887.[7]

He was a member of Victoria’s Legislative Council for a period encompassing 1889-1901.

From the Perth Daily News:

EDWARD MOREY. MELBOURNE, This Afternoon. Edward Morey, an ex-M.L.C., died at Ballarat, aged 75. He arrived in Victoria in 1853, and was a prominent man in the district, being largely interested, in many large mining ventures.[8]

From the Adelaide Chronicle

Mr. Edward Morey, a well-known mining investor and grazier, died late on Friday night at Ballarat after a brief illness, caused by a clot of blood settling on the brain. Mr. Morey, who was 75 years of age, was one of the early pioneers of the Ballarat district, in the opening up of which he took a prominent part. He was a native of Finsborough, near Kent. In 1853 he took up his residence in Adelaide, and on going to Melbourne he had charge of a rig in the Yarra. He arrived in Ballarat (says the 'Age') with a party of sailors towards the close of 1853, and worked as a digger. He engaged in exploration work in South Australia and Queensland.[9]

From the Ballarat Star:

DEATH OF HON EDWARD MOREY. AN INTERESTING CAREER. One of the best-known identities of Ballarat in the person of the Hon. Edward Morey passed away s last night at his residence in Lyons street north, after a comparatively brief illness. The deceased gentleman was a figure in Ballarat society, who will be sincerely missed. He was a genial unassuming man, who in a quiet way was a powerful factor in the building up of the city and town also and the news that he had been seized with an attack of apoplexy was heard with keen regret, winch developed into genuine regret, when it was learned that the had succumbed to his illness.

The late Mr Morey was born on the 29th March, 1832, at Frinsborough, near Rochester, Kent, was thus 75 years of age at the time of his death. He had an adventurous life for many years, going to sea as a middy at 13 years of age land, serving his apprenticeship on boats trading in the Mediterranean and on the English coast. He then joined the Aberdeen clipper Columbus, and sailed for Hobart, which was reached after a voyage of 135 days, on the 16th May, 1852. He stayed there for three months, and then sailed, for the Mauritius, where after some months he shipped as a passenger for Australia in the brig Sir Walter Scott. He landed in Adelaide in 1853, and found the place nearly deserted by abler bodied men, most of whom had gone to Victoria to the gold diggings. Mr Morey accepted a post is stevedore at Port Adelaide, but soon, decided to come to this State, and for two months had charge of a small brig on the Yarra.

Then he went to Geelong, and joining a party of sailors who, were setting out for the goldfields, came to Ballarat and started digging. This party, known as “The Sailors"' was destined to be largely instrumental in opening up many of the best known mines here. They began work in the Prince Regent's Gully, and in 1853 went to Sailors’ Gully, and subsequently the New Chum Gully near where, the Half-way House, on the Buninyong road stands. Dalton's Flat and the Canadian Lead were also prospected, the party working in a shaft near which one of the biggest nuggets, was got. They also worked on the Red Hill, but struck water, and were swamped but the water rising to the sill of the shaft. Some of the adjoining claims were also flooded; and a man was drowned. The Red Hill mine was, however, worked subsequently, and some good gold got. The "Red Streak” and “Gum Tree Flat" were also worked, and the latter place became famous as the “jewellers's shop,” the yields from the district being so great that as much as 50,000 oz per week were sent away by the escort.

Mr Morey was amongst those who received Governor and Lady Hotham, and, told some amusing stones of the welcome given to the Governor, and his lady. The deceased gentleman had some picturesque reminiscences of the Eureka fight. In 1854 he and his party were working at Clayton's Hill, and they were awakened by the firing of the English soldiery. They witnessed the attack, and subsequently entered the stockade, and saw some sights that Mr Morey never described without a thrill of horror. To him the affair savored of a massacre. He with others ministered to the wounded, and endeavored to assuage their suffering.

In 1855 Mr Morey, with Mr. J. Trust well, entered into the business of supplying mining materials, receiving in payment a share in the claims. This proved an extremely lucrative business. Mr Morey visited the Hard Hills, near Buninyong, and was among the first, to open up the rush there. For some three years he visited various fields and in 1859 opened up the Southern Light lead, a new find at Carngham. Then the party discovered the Standard, near Linton, a very rich claim and were also interested in “the 14 and 15,” and the “No. 1,” both very lucrative ventures. He was also interested in the ‘‘St. Tower” and “Robin Hood” claims, in Happy Valley, and other profitable claims.

In 1860 Mr Morey went to New Zealand, and followed the Woolshed and other rushes in the South Island, but returned after a few months, to Ballarat. He entered into partnership with Messrs Trustwell, M. Beard, and Lewers the latter manager of the Bank of New South Wales, and agreed with Mr Rowe to mine on 20,000 acres of his Glenfine, property, at Pitfield; the party contracting to, pay £15,000 for the right. This venture met with little success, but mines were opened up, such as the Exchequer, Lallah Rockh, Golden Empire, and Break o’Day, and in all of these Mr Morey was a director. In 1865 he came with his wife to Ballarat to reside; and with Mr Chalmers opened up the Ballarat Freehold mine, being subsequently, associated in the Newington, Great Western Park, and Hand and Band claims.

In 1868, he entered into pastoral pursuits, purchasing 1000 acres of rich land, known as Linton Park, near Linton, which he held to his death, farming a portion of it, and devoting the rest to sheep and cattle breeding. His herd of Jersey cattle was a well-known came in pastoral circles. He also acquired 8000 acres o£ land from, the Mounts Emu Estate, and kept a fine flock of merinos, stocked from Mr Russell's Carngham stud. He still maintained his active interest in mining, and floated amongst other companies the Canterbury, and Morey's Freehold. During the seventies, he visited Maryborough and Avoca, and floated other companies, some of which, proved very profitable. At Bet Bet and Havelock he obtained 1200 acres of land from farmers, with the right to mine for 20 years and the companies floated here was the Duke Estate. About 1880 the Chalk's Estate, Kong Mong and Napier were floated, and proved lucrative.

It is not generally known that Mr Morey did a good deal of exploring in the centre in Australia. One part he was associated with, started from Beltana in South Australia, and travelled right through the northern country. In 1868, with the Hon. Hy. Gore, he went through Northern Queensland and explored country infested with aboriginal tribes, who however, gave the explorers a kindly welcome. Mr. Morey had many and diverse interests in Ballarat, for in addition to his mining and pastoral ventures he founded a macchinery business, which has been carried on for many years. Mr Morey entered politics in 1889 by being elected to the Legislative Council...as one of the four represenatives of the Wellington Province... During his membership he was elected to the Railways Standing Committee as one of the Upper House representatives...

He was ...mayor of the city, and has always been [...looked...] upon as a liberal minded councillor with broad views. He was ... a member of the Fire Brigade [...Board...]. He was...on the committees of the Art Gallery...the Commercial Club...[and director of many] mines, and was a Freemason of good standing. He was a keen yachtsman, and was for twelve years Commodore of the local club. There were few movements with which he was not associated, and he was, as might well be expected, an authority on all things appertaining to mining, agriculture, sheep and cattle raising, and land settlement. Mr Morey was a thorough believer in throwing land open by means of railways, and was a keen advocate of the Newtown-Beeac railway. He was a man of kindly and genial temperament and was very popular and highly respected by all with whom he came in contact. He was married in 1855 at St Paul's, Ballarat East, to the only daughter of Mr Alexander Frickett, of Manchester; England, and had a large family. Mrs Morey predeceased her husband some years ago.[10]

From the Maffra Spectator: