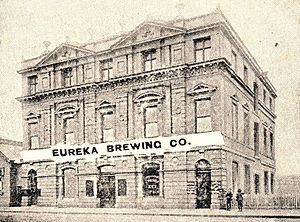 The Eureka Brewing Company, also known as the Eureka Aerated Waters and Brewing Co., was a soft drink manufacturer in Ballarat.

The company formed in September 1897, when William John Hare, Jessie Evans and Alfred Clarke, formed a partnership and purchased the business of J. J. Trait.[1] Trait had a factory at 53-57 Lydiard Street, which had previously been the premises of R. M. Goodfellows and Co..[1]

In 1889 Hare moved to Melbourne to set up his own factory, and the partnership was dissolved on 18 October 1899.[1] Clarke and Evans had also set up a business in Melbourne, at Fitzroy, the Bux Brewing Co.[1][2] Evans and Clarke formed a new partnership with David Jones in about 1900.[2]

They continued running the Eureka Brewing Co. until 1902.[1] On 4 April 1902 the company was purchased by Priscilla Nicholas and Alice Isabella Clarke.[1] They moved the business to Creswick Road. Alice Clarke left the partnership in 1905 and Nicholas operated the company until 1922.[1] It was purchased in 1922 by the Eureka Manufacturing and Agency Co. and the factory moved to 1020 Sturt Street[1]

By 1926 it was known simply as the Eureka Cordial Factory.[1] The business closed soon after.[1]

According to their letter head in 1915, the full title of the company was the Eureka Aerated Waters and Brewing Company.

Their advertisement for the 1916 Factory Day read:

EUREKA BREWING CO. For many years the Eureka Brewing Co. has catered for the public in the direction of soft drinks. The company, whose factory is in Creswick road, aims at keeping abreast of the times, and in order to make that possible they have fitted their works with machinery that enables them to fulfil their extensive orders promptly. Their Bux Ale and other specialities have earned a wide reputation, and the mode of manufacturing these will be fully explained and demonstrated to those who so desire.’ [4]

For some years the Eureka Brewing Company, originally doing business, in Lydiard street, but now established in a large way in the Creswick road, on the old Barley Sheaf Brewery Company's premises, has been popularising its goods by means of the high quality attained. In this well equipped factory all kinds of aerated waters, hop beers, and cordials are manufactured, according to 'the latest methods, and a visit on factory day will be welcomed by the company.[5]

The company had a display of their goods at the Products and Manufacures Exhibition in 1917:

EUREKA AERATED COY. Display of their productions in all kinds of cordials, "Bux Ale" standing out prominently[6]

Bux Ale was listed in an advertisement from 1900:

From a newspaper advertisement in 1903:

BUX ALE - One of the Best Summer Beverages obtainable is Bux Ale. It is brewed from Malt and Hops, is warranted absolutely pure and the price at which it is sold, viz, 6d per Large Bottle, brings it within the reach of all.[8]

Mr Jack Keegan, jnr., of Morwell, met with a painful accident in a simple manner on Wednesday evening last. He was in the act of opening a bottle of Bux Ale, when the cork suddenly flew out, striking him in the eye with such force that he was knocked down. His eye was so severely injured that hemorrhage immediately set in, followed by blindness of the optic. Dr M'Lean has recommedded (sic) treatment by a specialist, and Jack left for Melbourne by the evening train in order to obtain same.[9]

BO Punch listed in an advertisement from 1915:

THE Eureka Aerated Waters and Brewing Co. have pleasure in announcing that they have secured the service of Mr Tom Downer, as Cordial Maker, and are now making a full range of first quality cordials and aerated waters. Sample our B.O. Punch.[10]