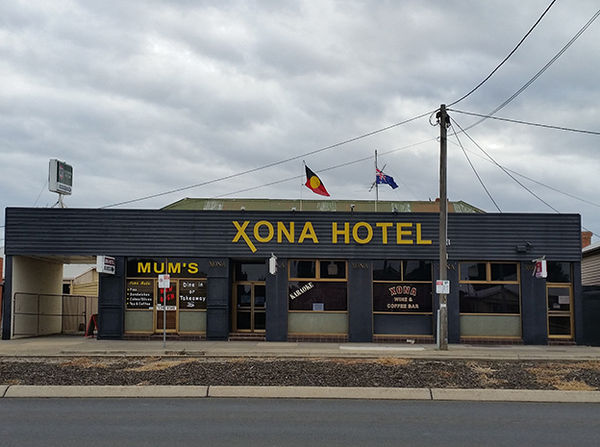 There was also an Exchange Hotel in Ballarat. 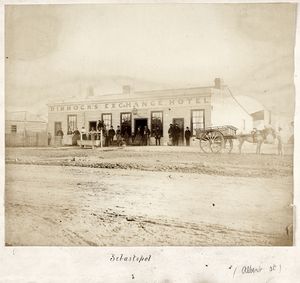 "The Exchange Hotel, Sebastopol, kept by Mr Dimmock," the Ballarat Star reports, "was entered by some robbers on Thursday night, and two watches, some cash, and other articles were stolen."[1]

In May 1908 the Licensing Court met to discuss closing hotels in Sebastopol, including the Exchange:

EXCHANGE HOTEL. Exchange Hotel. Sebastopol—Owner, Ballarat Brewing Company; licensee Herbert Williamson. Mr Pearson appeared for both parties. Inspector Balohin said the hotel was in Albert street, Sebastopol. It was an old wooden building in very fair repair, well kept and furnished, and well conducted, the rent was 30s a week, and the assessment £36. In view of the number of hotels in Sebastopol he considered that the Exchange could be closed without causing inconvenience. Constable Crimmins said he did not think the hotel was required. It was situated between the National and Commercial Hotel. He considered that both the Commercial and National were better situated for business than the Exchange. Senior Constable McDonald gave similar evidence. Mr Pearson contended that there was room for three hotels in that neighbourhood. If it were necessary that one should be closed it should certainly not be the Exchange. John Wall, town clerk, Sebastopol, said the population of Sebastopol was 2000. From 1870 to 1880 the population was 9000, and there were 25 hotels in the borough. He did not think three hotels were required in one block. To Inspector Balchin - He thought one hotel would be sufficient in the block, between Walker street and Ophir street. Herbert Williamson, licensee, said that his was the only hotel in Sebastopol possessing a billiard table. He did a good local and wayside business. Alfred Boyack, and other residents of the neighbourhood also gave evidence. Decision was reserved, and the Board adjourned until the next day.[2]

On 24 October 1925 Annie Tierney, licensee of the Exchange Hotel, pleaded guilty to several breaches of the regulations in the Sebastopol court on Thursday. She was fined £2 for disposal of liquor after hours, £2 for failing to enter up the lodgers' book, and £2 for permitting persons on the premises on 10th September. Two men concerned were each fined 20/.[4]

The Exchange Hotel was in Albert Street, Sebastopol.[3][5]