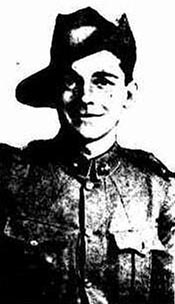 Frank George Stephens (143) was born at Sebastopol, Victoria[2], in 1890 and attended Sebastopol Primary School[3] in 1890. At the time of his enlistment, on 18 August 1914, Frank Stephens was a 20 year old farmer.[4] and Magpie Primary School. He served with the 8th Battalion at Gallipoli, France and Belgium .

Private Frank G. Stephens (wounded) is 22 years of age, and came from Sebastopol. He is a cousin of Cr. T. Dickinson, upon whose property he was working when he enlisted.[5]

He was mentioned in despatches for participation for a successful raid on enemy trenches on 30 September 1916.[7] Frank Stephens was killed on or around 04 October 1917 during the Battle of Broodseinde, Belgium.[8]

The will of Francis Stephens was dated 02 June 2017, awitness by Second Lieutenant R.V. Andrewarthin and Lance Corporal Lloyd Arnott, both of the 8th Battalion.[9]

World War One service recognised on the Ballarat Avenue of Honour and the Magpie State School Honour Roll.

==Notes==He served during World War One, and was killed on or around 04 October 1917 during the Battle of Broodseinde, Belgium.[10]