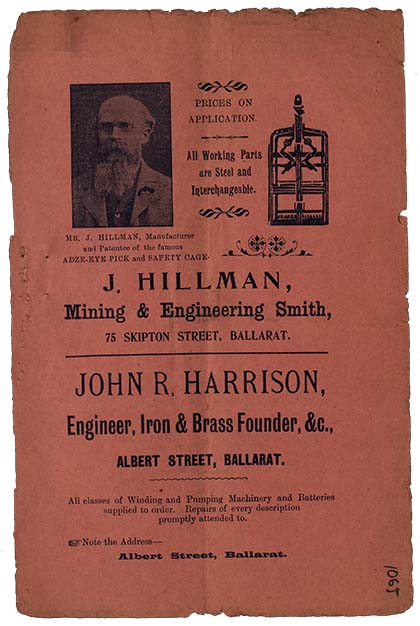 In 1865, when Hillman invented a safety cage for hauling, he was living in Skipton Street. The invention involved a powerful spring on each side of the cage, with cams holding chisel shaped sections, slightly curved, and held back from the timber guides with the spring and a trip plate. If the chain or rope broke the trip was released, the chisel sections sprung open and bit deep into the guides slowing the falling cage to a stop. [1]

Some weeks since attention was drawn to the fact that Mr Hillman’s safety cage factory and Greenhalgh's tannery, situated in Hill street, both encroach upon municipal territory, and the occupants were communicated with concerning the matter. The encroachments, it appears, are not upon the street, but upon a reserve, half a chain upon each side of the creek being proclaimed a reserve. Negotiations were opened up with Mr Hill man and the owner of the other property, and conditions stated upon which occupancy of a portion of the area would be permitted, as the council were averse to taking anything even bearing the appear ance of harsh measures. These, however, have, we understand, been deolined, as the occu pants put forward a plea of adverse possession. Then the matter rests at present, and it is not likely that decisive action will be taken without further communication with the alleged trespassers; but councillors express their determination to protect the public property.[3]