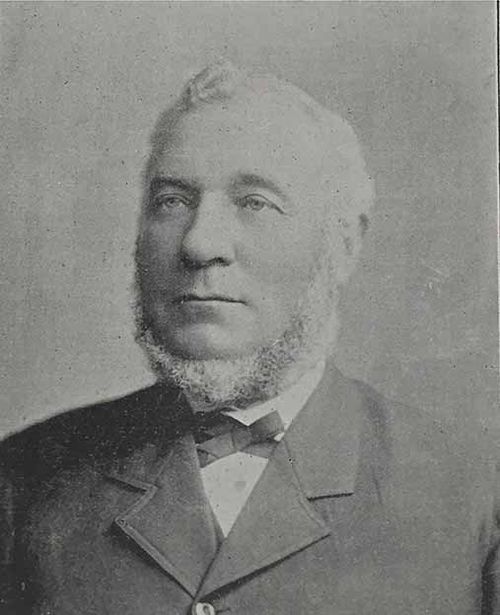 John Paul Murray was from the Orkney Islands, in the North of Scotland. He arrived in Melbourne as a 16 year old on 12 January 1949 an the Manchester, and was engaged for some time on station work [1] He was a long term President of the Old Colonists' Association.

John Murray married Agnes Campbell.[2] He was a member of the St. Andrew's Kirk Committee.

In John Murray served as president of the Ballarat Shire Council, and in 1891 he became a Justice of the Peace. [3]

AN ENJOYABLE GATHERING.
Following the annual meeting of the Old Colonists’ Association last night a social gathering was held at the hall, at which there was a large attendance of Old Colonists amongst them being Messrs D.R. M'Gregor, Jos. Cuming, John Blyth, and J. MacRobertson, of the Victorian Old Colonists’ Association, Melbourne. The president of the association (Cr Murray) presided, and was supported on either hand by the Melbourne visitors.' Mayor Barker, Mayor Elsworth, and officers of the association. The gathering was a most enjoyable one. and practically celebrated the coming of ego of the association, the 21st annual, meeting being held the same evening. Cr Murray, the retiring president of the association, was heartily congratulated on having sufficiently recovered from his late indisposition to be able to preside. ... During the evening Mayor Barker, who, with the mayoress, was a guest of the association, unveiled a very fine portrait in oils of the president, executed by Mr T. Stanton Bowman, and! presented by Cr Murray to the association. As a picture and portrait the painting is excellent, the characteristic lines of the president's countenance and the pose of the sturdy figure being faithfully delineated. The mayor, in unveiling the portrait, remarked that Cr Murray was a man whom all delighted to honor. He was a worthy Old Colonist, and his fellow Colonists had done well in reflecting him as president. He was a man who had done great good in the City, and many an old colonist had to thank him for kindly help, unostentatiously given. He had, built himself up into a prominent position in the City, and he well deserved the honors extended to him by his fellow citizens. The Old Colonists had done noble work in Ballarat, and that work the present generation were building on, and future ones would continue to build on. The association had done splendidly, for out of an income of £15,000, extending over 21 years, they had expended over £4OOO in relief to their poorer brethren. It was something to be proud of. Regarding the portrait, he had certainly to congratulate the artist upon it. It was a speaking likeness and he had great pleasure in handing it to the association. Mr W. Robertson, vice-president, received the portrait on behalf of the association, and in doing so remarked that the reception of this portrait fulfilled a long-expressed desire of the association. Mayor Elsworth proposed the health of Cr Murray in eulogistic terms, to marking that all present would join in wishing him long life and happiness. Cr Murray, who, on rising to respond, was received with cheers, remarked that he had been 55 years in the, colony, and was still knocking about. Nothing pleased him more than to be doing some thing for the old colonists. The association was a benefit one, and no poor old colonists went without so far as they were concerned. The association was doing all it could to help the old pioneers, the finest lot of men who ever came here. He hoped the country would be able to produce men like them, and not whipper snappers. He wanted to see men of stature grown in the colony. He believed in the social aspect of the association, for The social, friendly, honest man whate'er he be, . ’Tis he fulfils great nature’s plan, and none but he. And those words of Burns were true in every aspect. ... [4]

The death occurred at Ballarat to day, from heart disease, of Mr. John Paul Murray, at the age of 71 years. The deceased owned a large estate in the western district.[5]