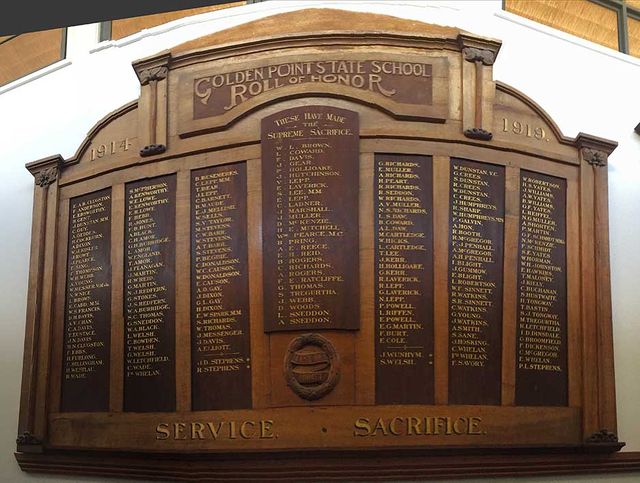 Joseph William Pearce was born at Ballarat, and obtained the Merit Certificate from Geelong College. His father was Isiah Pearce of Barkly Street, Ballarat East. At the time of his enlistment he was a 29 year old Mine Manager. His parents were deceased so his next of kin was his oldest brother John Pearce. Joseph Pearce served with the 21st Battalion and at the time of his departure he was a Second Lieutenant. Pearce served in the Dardenelles, Malta, Alexandria, France and Belgium, and was wounded many times, including at Pozieres in August 1916. The 4th London General Hospital reports he is suffering from shell shock, was blown up at Pozieres in 19 August, 1916. The Medical Board reported he was blown up by high explosives and buried, lost memory, was found walking about, he now suffers from tremors, increased reflexes, insomnia, and bad dreams; was blown up and buried ten days previously.[1]

On 25 October 1916 the Military Cross was awarded in the field to Lieutenant Joseph Pearce for conspicuous gallantry during operations. He guided up the relieving troops under heavy fire, and remained on duty the following day after twice wounded until he was ordered back to the aid post. He has done other fine work.[2]

J.W.Pearce was killed in action[3] on 04 October 1917. At statement reads: At about 9 a.m. on the 4th October 1917, Broodseinde Stunt. Killed by revolver bullet by Hun Officer on the forward slop of Broodseinde Ridge Head wound. Buried by party under Capt Sale M.C. & Bar 21st Battalion on spot where he fell. He is remembered on Part 8 of the Menin Gate Memorial Register. [4] and on the Old Colonists' Club Ballarat Honour Board.

World War One service recognised on the the Ypres (Menin Gate) Memorial (Panel 23), Belgium; Ballarat Avenue of Honour; the Golden Point State School Roll of Honor, and the Honour Board of the Old Colonists' Club Ballarat.