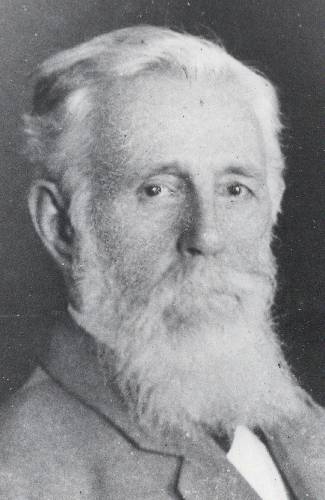 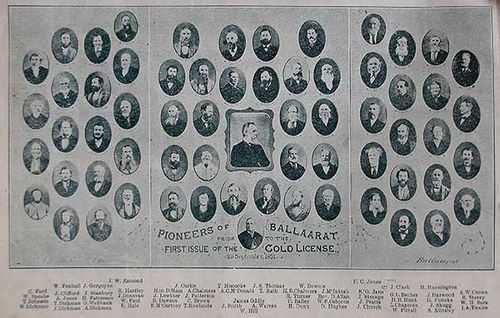 Born in Lancashire, England on 31st March 1824, James Oddie arrived in Geelong on 29 June 1849.[1] He conducted a foundry there until gold fever lured him to Buninyong and then Golden Point, Ballarat in 1851. As a diggers' representative he protested against the Miner's Licence, and at one stage was refused a licence for speaking out against the fee. He joined the rushes to Mount Alexander and Bendigo, and in 1853 he opened a store at Smythesdale, objecting to the £50 store licence.

In 1856 Oddie became the first Chairman of the Ballarat Municipality. [3]

James Oddie was a Justice of the Peace (JP). 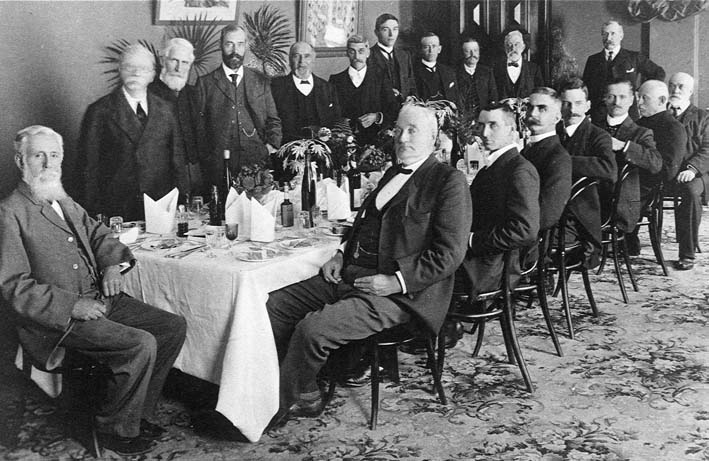 Oddie was a friend and admirer of Peter Lalor and later erected the Sturt Street statue of Lalor at a cost of £2200.

Being a devout Christian (Wesleyan Methodist), in 1866 he was the largest benefactor for the setting up of the Bible and Tract Society which was formed to attack widespread drunkeness, profligacy, licentiousness and agnosticism in Ballarat.

From 1860-1891 Oddie served on the Benevolent Asylum Board, and was founder and patron of the The Ballarat Fine Art Gallery in 1884.[4]

In 1895, Oddie heard that the Eureka Flag was in possession of Mrs King of Minyip. He wrote asking her to donate or loan it to the Art Gallery. She sent it by post in a brown paper parcel, on a loan basis.

In 1891 Oddie donated "under the Burden and the heat of the day", a painting by David Davies, purchased by Oddie for 100 Guineas, which was double the artists selling price to the Ballarat Fine Art Gallery. [5]

James Oddie named a number of local organisations in his will, including 50 pounds to the Ballarat Ironworkers' and Polytechnic Association.

COMING HOME. BALLARAT REUNION.
By W.L.
Old Ballaratians scattered all over the Commonwealth, and, indeed, over the English-speaking world, are turning their eyes and their thoughts back to Ballarat. To them has come the call for a home reunion during Easter week. A general committee, with several sub-committees, is making extensive arrangements for a grand reunion extending from Tuesday, April 3, over Monday, April 10, and it is expected that many hundreds will avail themselves of the opportunity of revisiting the scenes of their early life.
Of the people who have left Ballarat during the last 30 years, there are estimated to he about 11,000 abroad. The figure is arrived at by taking the population in that period, the excels of the birth rate over the mortality rate, and the average death rate among those who left the place. Whilst Ballarat people are to be found all over the world, the vast majority of those who have left the city are settled somewhere in the metropolitan area of Victoria. From them the call home is meeting with a splendid response. Intimations have also been received of dwellers far distant returning home for Easter-week. Unfortunately, many brave young men who a few months ago thrilled at the sound of the name of their native city will not even hear the call home. They lie in their eternal sleep in Gallipolian Valleys or on French farms in the vicinity of the Somme. In the midst of its rejoicing, Ballarat will not forget its noble dead, nor its proud sons who are still fighting Freedom's battle.
Drawn generally from England, Scotland, Ireland, and Wales, the men of the early Ballarat days were of a resolute and progressive type. Very few of them went to the goldfields intending to remain there, but the freedom of their environment accorded with their disposition, and they settled down to fashion the bush country around them into the beautiful city that Ballarat now is. The late Mr. Duncan Gillies was typical of the first residents of Ballarat. Digger at first, he became a member of the Legislative Assembly for Ballarat West in 1860, but lost his seat in 1868, when he first accepted office as Minister for Lands in the Sladen Ministry. Subsequently he was Premier of Victoria. An earlier pioneer of Ballarat, who also became a legislator, was Mr. Peter Lalor, one of the leaders of the Eureka Stockade riot against the Government authorities in 1854. Mr. J. B. Humffray and he were the first representatives of Ballarat in the old Legislative Council before the Constitution Act came into force. While representing the electorate of Grant in the Legislative Assembly Mr. Lalor was elected Speaker of the House. Colonel W. C. Smith, or, as he was more familiarly known during the greater part of his Parliamentary career, "the Major," was another Ballarat man of some note who attained Ministerial rank. The late Mr. W. M. K. Vale, a former Attorney-General, was a Ballarat man of those stirring political times, while the late Sir Henry Cuthbert and the late James Campbell, M.L.C.'s. were typical Ballarat men who also became Ministers of the Crown. Turning to the municipal life of Ballarat - speaking collectively of the city and the town-the services of such men as James Oddie (the first chairman of the municipal council), Dr. James Stewart, Robert Lewis - (of Rowlands and Lewis), Daniel Brophy, John Whiteman Gray, J. Noble Wilson, Frederick M. Claxton, John Hickman, E. Morey, James McDowall, John G. McDonald, Charles C. Shoppee (city), W. B. Rodier. Dr. Clendinning, William Scott, Emanuel Steinfeld, James Russell, James Long, Theophidus Williams, and John Ferguson stand out. They were men of broad minds and high ideals. Ballarat's interests were supreme with them. 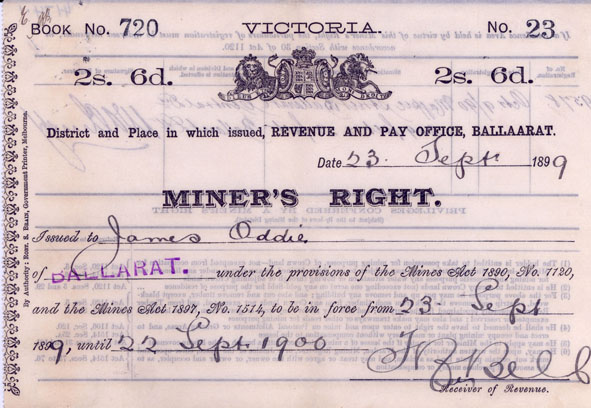 Among other men who influenced the life of Ballarat considerably in its earlier years were Mr. John Russell Thomson, whose magnificent bequest of statuary in the pavilion at the botanic gardens has attracted notice in world art centres; Mr. Thomas Stoddart, who made the first gift of statuary to the botanic gardens. Mr David Ham, a member of-the Legislative Council; Judge Rogers, Judge Trench, and Judge Gaunt, Mr. R. Walsh, Q.C., Mr. C. B. Finlayson, Q.C. (formerly Crown prosecutor), Mr. R. M. Serjeant (member of 'the Legislative, Assembly in I860), Mr., Andrew Anderson, Mr. R. T. Vale (a former member of Parliament for Ballarat West, who died recently), Mr. E. J. Bateman, one of the founders of the Ballarat "Star".
Public men of note who are still living include Mr Agar Wynne (who attained Ministerial- rank in both Stale and Commonwealth), Mr. J. Y. McDonald (who within the last few weeks resigned from the Legislative Council), Mr. T. D. Wanliss (formerly n member of the Legislative Council, and now a resident of Scotland), Mr. W. M. Achesoon, Mr. A. M. Greenfield, and Mr. J. M. Bickett.
Among the old Ballaratians residing in various parts of the Commonwealth are men prominent in legislation, law, art, science, and business. Legislators are found in the Minister for Customs (Mr. Jensen), the Victorian Minister for Agriculture (Mr. Hagelthorn), Mr. Membrey (honorary State Minister), Mr. McWhae, M.L.C., and Mr. Menzies, M.L.A. The Chief Justice of Tasmania (Mr. Justice Nicholls), Judge Eagleson, and Judge Wasley are old Ballarat boys, as is Sir Bernard O'Dowd, poet and assistant, State Parliamentary draughtsman. Mr. H. E. Starke, the well known barrister, though born at Creswick, spent his boyhood in Ballarat. The Commonwealth Under Treasurer (Mr. J. R. Collins) is a native of Ballarat. Medical men among old Ballarat boys include Dr. Orr, of Collins street: Dr. T. E. Wills, of Malvern; Dr. H. E. Letcher, of Adelaide; Dr. G. F. Sleeman, of Creswick; Dr. J. H. Sleeman, of Portland; Dr. Gawne of Jeparit; Dr Fred Middleton, of the Ross Sea Antarctic Relief Expedition; and Drs. F. and H. V.- Bennett, of Prahran. Mr. A. A. Buley, formerly principal of Grenville College, where Mr. Justice Nicholls, Judge Eagleson, and Judge Wasley received their secondary education, is now on the staff of the Melbourne High School. Mr.D. Avery, of the Working Men's College-staff; Chief Inspector Fussell, Inspectors T. E. and J. J. Bothroyd and Mr. W. F. Gates (assistant chief inspector), of the Education department; and Mr. A. A. Peverill, chief clerk of the Lands department, are, old Ballarat boys, as well us the mayor of Prahran (Councillor Austin Embling), the Rev. S. Hoban, of the Central Methodist Mission, Sydney, and the Rev. M. Daly, Colac. Mr. William Davidson, formerly inspector - general of public works in Victoria, received his initial instruction in Surveying while a resident of Ballarat, and the State income tax commissioner (Mr. R. M. Weldon) is a native of the city. Mr. J. F. Kirby, 'of Coleraine, who won the Melbourne Cup with The Parisian in 1911, was captain of the Ballarat Football Club in the seventies. Both Mr. Will Dyson, the artist, and Mr. E. Dyson claim Ballarat as their birthplace. Mr. Watkin Wynne, general manager of the "Daily Telegraph" newspaper in Sydney, in an old Ballaratian. He won the swimming championship of Ballarat in 1876, and the championship of Geelong by defeating Stedmun, on the Barwon River. Mr. Mcphan Ferguson, head of the Engineering firm which bears his name, was in business in Ballarat before he came to Melbourne. Ballarat men are conspicuous among members of the Stock Exchange of Melbourne. They include Messrs. W. J. Roberts (chairman). John McWhae. John S. Reid, Wallace Smith, John Rippon, A. E. and B. Millard, A. H. Tonkin, F. W. Holst, and J. Buchanan. Among other old Ballaratians may he mentioned Messrs- Alfred, Walter, and Frederick Sutton, of Suttons Proprietary Limited; Frederick and Maurice Cohen, of S. Cohen and Sons, hardware merchants; John Bailey, conductor of the Melbourne Choral Society: John West, secretary of the National Union; Hugh V. McKay, of the Sunshine Harvester Works; J. W. Kirton, formerly a member of the Legislative Assembly, and now secretary of the Master Bakers Association; Ex-Inspector Beckmann, of Warrnambool; Messrs. Hans Irvine, formerly member for Grampians in the House of Representatives; S. E. Figgis, secretary of the Colonial Gas Company, and a noted bowler in the Ballarat Cricket Club 33 years ago; Lieut. Colonel Wanniss, who had charge of a battalion in the First Australian Expeditionary Force; Captain D. J. Ham, who served through the Boer war; Major Jackson; and Messrs. J.H. Dill and D. Murray, legal managers: E. Cocking. J. L. Anderson; James Scobie, the well-known trainer; Mr. H. Niven, (F. W. Niven and and Co.), and Mr. E. A. Bennett (Superintendent of the Homeopathic Hospital).
Miss Mary Gaunt, the novelist; the Lady Mayoress of Melbourne (Lady Hennessy), Lady Irvine (wife of Sir William Irvine, K.C.). Mr. J. R. Trantham Fryer (Miss Bechervaise), and Mrs. J. J. Kingsbury (wife of a former Queensland Minister of the Crown, and now a Crown prosecutor) may also be mentioned as old Ballaratians. [6]

Mr James Oddie's Gifts - New Electrical Plant Started - Recently a number of electrical instruments were presented to the school of Mines by Mr James Oddie, and these have been installed in position by Mr J. Sutherland, lecturer and demonstrator on electricity. The formal starting of the plant took place yesterday, the honor of setting it in motion being very properly accorded to the donor himself. The ceremony was held in the presence of a small company, consisting got the president (Mr Andrew Anderson), the director (Mr F.J. Martell), members of the professorial staff, and several students. Mr Oddie's purpose of electric lighting, and the electro-deposition of gold, and which may be used fro both experimental work and giving students a practical idea of handling the machines and applying electrical energy generally; a large Wimshurst machine, a Ruhmkorf induction coil, and a fine set of Leyden jars. The dynamo which will bring about the electro-deposit of gold is a decidedly valuable acquisition to the plant ...[7] 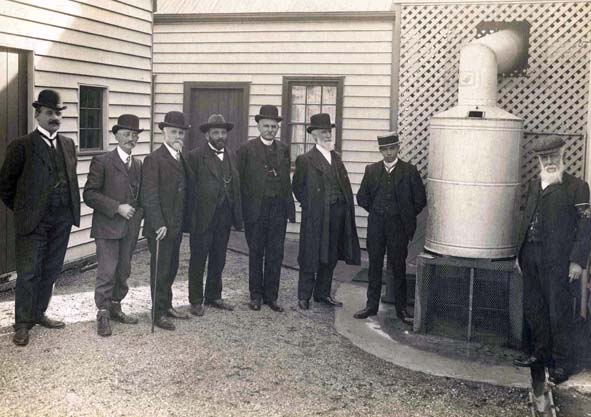 'James Oddie presents his invention, the Shackleton Polorizer, to the Ballarat School of Mines, courtesy University of Ballarat Historical Collection (Cat. No.206)