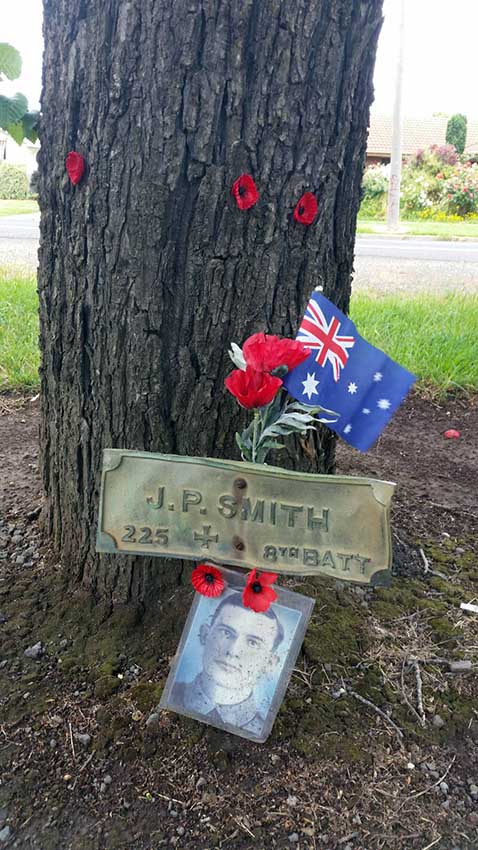 Ballarat Avenue of Honour Memorial for John Patrick Smith on the occasion of the centenary of his death, 2017. (Photograph courtesy M. Taffe, Hymettus Cottage Ballarat)

John Patrick Smith was born in Ballarat. He was a 19 year old labourer when he joined up for service during World War One on 27 August 1914.[1]

John Smith (280) served with the 8th Battalion listing his next of kin as Mr W. Blackford of 205 Ligar Street, Ballarat - also his father Mr Edward Smith of Millbrook. He was court martialled on 06 August 1915 for sleeping on his post and sentenced to 56 days F.P.[2]

Private Smith died as the result of multiple shrapnel wounds received in action at No. 54 General Hospital, Wimereux, France on 02 November 1917. He is buried in Wimereux Military Cemetery. (Plot 6 Row F Grae 23A)[3]

To
The Australian Record Office
I should be very grateful to you if you could give me any information regarding No 280 Pte J P Smith 8th Battalion Transport Driver recently reported killed in action in France. I am a friend of the dead solder and have been drawing his Paid and yet some other person was notified of his death before me or hisown people. I have written trying to find his sister. In his last letter he said he was going to marry a girl in Ireland. Cold you till me if their was a will made as I am very worryed to know what to do with his money. I heard the person who received word of his death was putting in a claim for deferred pay. IF you could give me any information regarding his will it would gratly oblige.
Mrs M. Collins
Address
512 Macarthur St
North Ballarat[5]