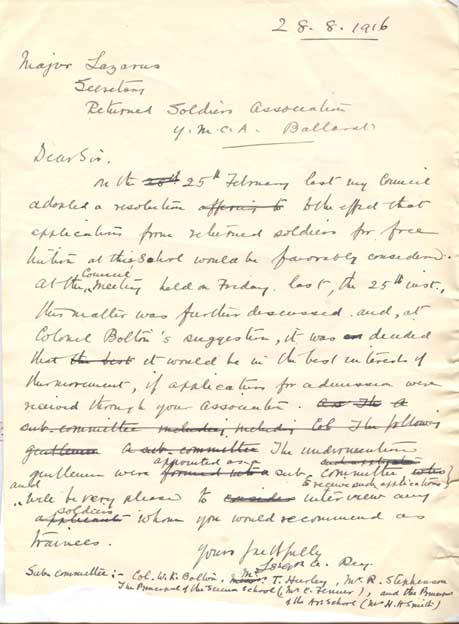 Letter from the Ballarat School of Mines Concerning training of Returned Soldiers, Federation University Historical Collection (Cat. No. 7773)
Dear Sir.
On the 25th February last my Council adopted a resolution to the effect that application from returned soldiers for free tuition at this school would be favorably considered. At the Council meeting held on Friday last, the 25th inst., the matter was further discussed and, at Colonel Bolton's suggestion, it was decided that it would be in the best interests of the movement, if application for admission were received through your association.
The undermentioned gentlemen were appointed as a sub-committee to receive such application and will be very pleased to interview any soldiers whom you would recommend as trainees.
Yours faithfully
Joseph A. Day
Sub committee:- Col. W.K. Bolton, Mr T. Hurley. Mr R. Stephenson, The Principal of the Science School (Mr C.E. Fenner), and the Principal of the Art School (Mr H. H. Smith)

Julius Samuel Lazarus was born in 01 August 1861. He was a certified Civil and Hydraulic Engineer, a certified Land and Mining Surveyor, a certified Municipal Clerk and a Certified State School Teacher. [1]

In June 1915 Julius Samuel Lazarus acknowledged the good wished of the members of the Old Colonists' Club Ballarat on his departure for Gallipoli.[2] He was married to Eva Maud Bainmore who was listed as his next of kin on his enlistment paper. [3]

At the time of Lazarus's enlistment in the Australian Military Forces he was Secretary and Engineer with the Bungaree Shire, living at Leigh Creek. he was gazetted as a major on 07 March 1910 at the age of 53 and 7 months. He was a member of the 14th Battalion.[4]

He disembarked for overseas duty at Alexandria on 05 November 1915 and joined his battalion on the Gallipoli Peninsula on 13 November 2015. He was relieved from duty at the Dardenelles on 04 December 2015, and proceeded to hospital at Alexandria on 21 December 1915. Lazarus on was discharged to duty ex the 2nd Australian General Hospital on 31 December 1915. He returned to Australia on 14 May 1916, with his appointment being terminated on 28 May 1916 medically unfit. A letter to the commandant of the 3rd Military District, dated 20 May 1916, states "Major Lazarus will be available as an officer of the Citizens Forces for such duty as may be required." [5]

World War One service recognised on the Ballarat Avenue of Honour, and the Honour Board of The Old Colonists' Club.