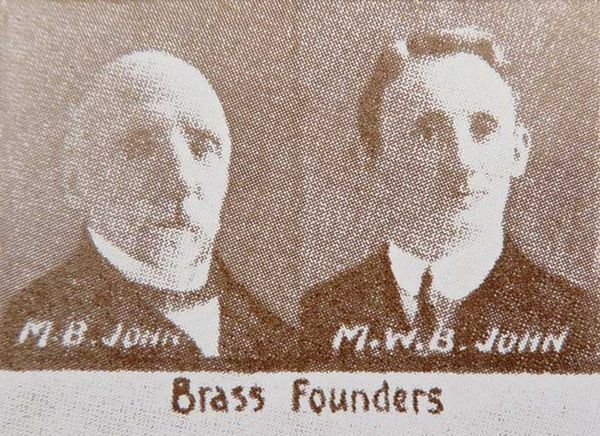 Morgan Bevan John (1841-1921) arrived in Victoria c1870 from Wales, England, and after working as a journeyman at several local foundries took the position of brass-moulder at the Phoenix Foundry where he remained for 18 years. [1] In 1896 Welsh born Morgan Bevan John started the 'Ballarat Brass Foundry' in Armstrong Street on land leased from the Welsh Church. There were three men employed and the block was probably the former S9-16. The business grew rapidly and the land fronting the realigned Lydiard Street was also leased from the church. The products of this firm were well known among engineers throughout the Commonwealth.

In 1896 the Argus announced an extension to the factory describing M.B. John as specialising in the manufacture of all types of valves and fittings in bronze, iron, and steel for steam, water, air, oil, and gas services, and have won a leading place in this branch of engineering in the Commonwealth. The extensions created works with a total floor space of 60,000 square feet. The departments during this era were an iron foundry, non-ferrous foundry, machine shop, and store, and were laid out on modern lines, and equipped with the latest plant and machinery for the efficient flow of production from the raw material to the finished product.

M.B. John Hattersley were manufacturers of industrial valves for the use with steam, water, oil, air, gas and chemical in 1963.[5]

William A. Prowse, fitter and turner.[7]