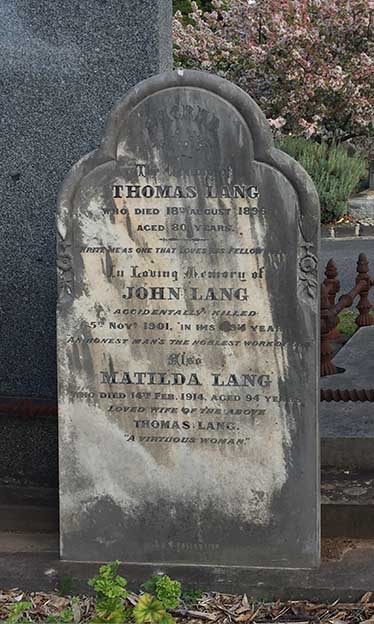 Matilda Lang was the inventor of a washing machine.

Matilda Lang was the daughter of John Gilchrist of Paisley, Scotland. She married Thomas Lang, the Ballarat nurseryman. She died on 14 February 1914 and was interred at Boroondara Cemetery (Kew).[1]

Matilda Lang invented a washing machine known as "Mrs Lang's Patent Economical Domestic Washing Table". She applied for a patent for improvements in washing, scouring or cleansing clothes, wool or fibrous goods in 1871.[2]

We are continually meeting with something new, and the novelty of to-day is a new washing machine —Mrs. Lang's "new patent economical domestic washing table"—which really is an improvement, and its economy of time, labor, and soap must be evident, to say nothing of the saving of the clothes themselves, in an avoidance of the wear and tear by hand-rubbing, or tho usual knook thump of the ordinary washing machines. The system adopted by Mrs Lang is, as it were, a rolling and squeezing of a lot of Wet clothes, soaped, and with cold water, which, from the experiments I saw, was most effective.[3]

Mrs Thomas Lang,- Melbourne and Ballarat, has patented in Victoria,' Great Britain, and America, an ingenious washing table, which is likely to fall into general use so soon as people can be induced to believe that so simple a contrivance can possibly do the work.’ While the ordinary American washing table secures a means of cleansing : linen, &0., by violent friction, which involves rapid wear, Mrs Lang’s invention secures, the same, or better, detergent results by much more moderate labor, pressure and suction instead of friction, and no wear whatever. [4]

WASHING MACHINE TABLE Mrs. Thomas Lang of 52 Elizabeth Street in Melbourne patented (number 53) her ‘Economical domestic washing table’ in 1873. She claimed it combined cheapness, ease of working, saving of soap and other materials of washing, saving of the clothes and articles washed and only requiring cold water to be used. The washing table sat on timber trestles which could be purchased separately by the customer. The 8 washing table was sold at £1 7s 6d. Mrs Lang also exhibited her invention at the Victorian Exhibition held in the Great Exhibition Hall in Melbourne (above). She advised it was ideal for washing and bleaching linen and woollen clothing should be pinned on paper. She also advised that camphor should be used afterwards for woollen clothing and furs to protect them from the moths or other bugs. Besides home-made soap there were the ever increasing commercial brands that could be purchased from the general store to use with Mrs. Lang’s invention.