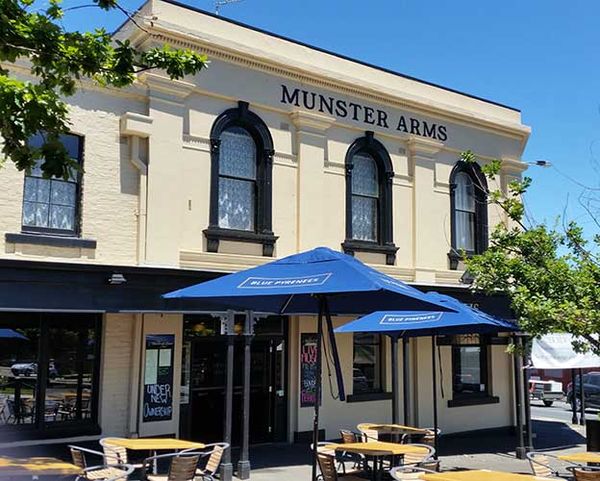 For other businesses with the same, or similar names, see Munster Arms.

Ballarat's Munster Arms was designed by Henry R. Caselli. It was built by Taylor and Ellis.[1]

TENDERS required for brick and stone additions to Munster Arms Hotel, Victoria street, for Mr J. Shelley. Drawings and specifications may be seen until Tuesday afternoon, the 18th instant, at the office of H.R. CASELLI, Architect, 3 Mechanics' Institute Chambers.[2]

Several new buildings are now near completion in the town. The Munster Arms hotel, at the corner of Victoria and Humffray streets, is a plain two-storied brick building, designed by Mr Caselli, and built by Taylor and Ellis, for £900. Brophy’s new hotel, at the corner of Sturt and Doveton streets, is one of the handsomest elevations in Ballarat. It is in three stories, cemented with abundant enrichments, and is still further embellished with a very elegant verandah and balcony. This building is from a design by Mr Caselli, and was built by Seeley, Tunbridge, McDonald, Reynolds, and Jones, at a cost of £2000. The same architect prepared the design for the two-storied premises in brick cemented, just erected by Button, Thornton, and Rennie, for Mr Magee, in Armstrong street. This frontage is 30 feet, including a built over way-right. The elevation is about 30 feet also, and is plain and neat. The same architect has prepared the design for two-storied premises in Bridge street for Mr Bruun. These will consist of a double-fronted shop to harmonise with the premises already erected there, and will complete a hand some block. The builders are Hastie and Dawson, for £450; frontage 19 feet, and elevation 36 feet.[3]

The Munster Arms was in Humffray Street.[4]