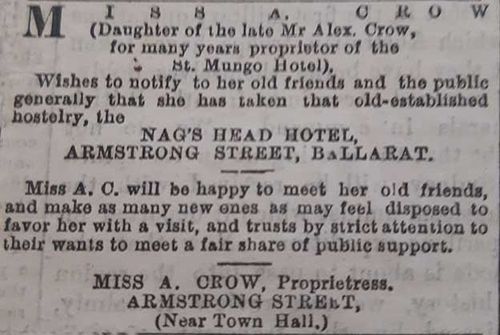 Advertisment in The Ballarat Star May 19 1885, Federation University Historical Collection (Cat. No. 12829)

There was also a Nag's Head Hotel in Clunes.

The hotel lease was offered for sale in December 1868:

CENTRAL HOTEL for SALE.—In consequence of the illness of Mr Sheward, the LEASE for 21 years of the NAG'S HEAD HOTEL, Armstrong street, Ballarat, is for SALE. The house is newly built of brick and stone, and completely fitted up ; contains 17 rooms, kitchen, and servants' rooms. This is a good opportunity for a person of capital to secure a safe investment. Terms very liberal, extending over 21 years. Immediate possession may be had. Apply to Mr W. R. Smith, Mr Deeble s Auction Rooms ; or Mr Headdey, Lydiard street.[1]

On 22 March 1915, the hotel was included on a list of hotels to be deprived of their licenses. This list was complied by the Licenses Reduction Board in Melbourne. The Ballarat West licensing district hearings on this list were to be held on 27 April.[2]

The hotel was one of six de-licensed hotels sold in November 1920:

The Nag's Head hotel, in Armstrong-street, and adjoining two story shop premises, realised £1600, the purchaser being Mr. F. Hasell... belonged to the Ballarat Brewing Company. Most of the hotels which were sold will be pulled down, and new premises built.[3]

The Nag's Head Hotel was in Armstrong Street.[2][1]