From Ballarat and District Industrial Heritage Project
Jump to: navigation, search
The Phoenix Brewery was established in 1857 at Warrenheip by James Coglan. 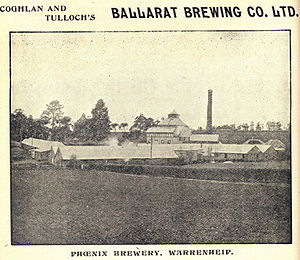 On 24 October 1860 the company announced in The Star that Mr Alexander Magill had joined the firm and would subsequently trade as Magill & Coghlan. [1]

The Brewery was amalgamated with the Royal Standard Brewery in 1895 to become the Ballarat Brewing Company. The Phoenix Brewery continued to operate independently until it was closed in 1911.[3]