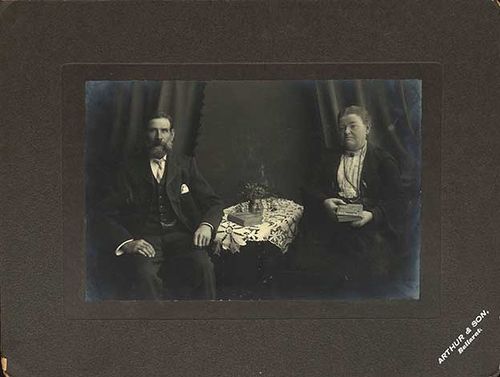 Garnet William Arthur was born in Ballarat and trained in Victoria as a photographer. Looking for a place to operate a studio, he arrived in Mt Gambier in 1904 and established his photographic business. After his eldest son, Colin, a member of the Royal Australian Air Force, was killed during World War Two, another son, Eric, joined Garnet in the business. Garnet Arthur retired in 1962. After this his son Eric continued to operate the business under the name, the Arthur Studio, until his retirement in 1989.[2]

R. H. ARTHUR & SON, Photographers and Photo Enlargers, BALLARAT, Are now visiting the district, and will remain a short time. All kinds of Photography executed on the most up-to-date style. G. W. Arthur, operator, having been over 7 years in the studio of Richards & Co., Ballarat, is a guarantee of his ability as a Photographic Artist. Messrs Arthur and Son carry a travelling studio which they erect at their customers residence, saving all trouble of travelling into town. Family Groups a Speciality. Messrs Arthur and Son are at present residing at the rear of Mr Collins' Store, Bell Street. Orders addressed — R. H. Arthur and Son., Photographers, Post Office Penshurst.[3]

R.H. Arthur and Son, photographer, of Ballarat, announce that they have opened the studio adjoining Mrs. Penny's Arcade (Mount Gambier).[4]