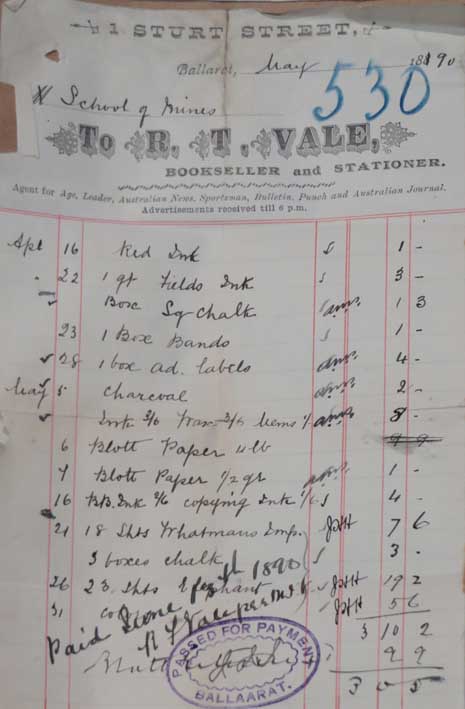 Richard Taylor Vale (born 30 August 1836 in London) arrived in Victoria in March 1853 and briefly mined for gold at Castlemaine before opening a bookshop. He moved his business to Beechworth in 1854 or 1855. Vale returned to England in 1860 to 1862 before establishing a bookshop at Smythesdale, finally settling in Ballarat in 1869. In 1865 he married Gertrude Campbell at Scarsdale, with whom he had seven children.

In 1882 Richard Vale was a committee member of the Ballarat Science and Field Naturalists Club.

The Ballarat School of Mines recognised his death in the following way:

Moved by Cr T. Hurley
Seconded by Cr G. Filcher:-
That this Council expresses its deepest sympathy with the family and relatives of the late Hon. R.T. Vale, and desires to place on record the high esteem in which that gentleman has always been held and to express appreciation of the generous and valuable service rendered by him to this institution.[4]