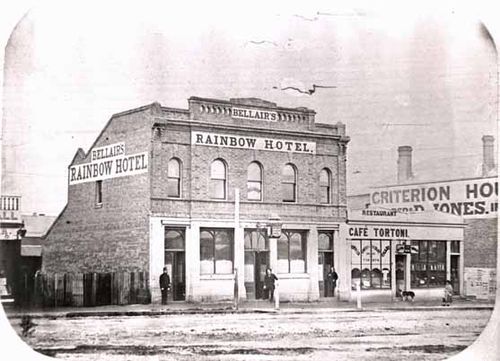 There was also a Rainbow Hotel in Ballarat East.

The Rainbow Hotel was in Sturt Street.[1]

Mr Carpenter at the Rainbow Hotel, Mr Thomas Carpenter one of the candidates for the vacancy in the representation of Ballarat West in the Legislative Assembly, met the electors on Tuesday evening in the large room of the Rainbow hotel, Sturt street. A large number of persons were present the room being crowded in every part.[3]

We regret to have to announce the death of Mrs Bellair, of the Rainbow Hotel, Sturt street. The deceased lady, who was for a long time one of the most popular members of the company at the Theatre Royal, Ballarat, died yesterday morning, after a somewhat protracted illness.[7]