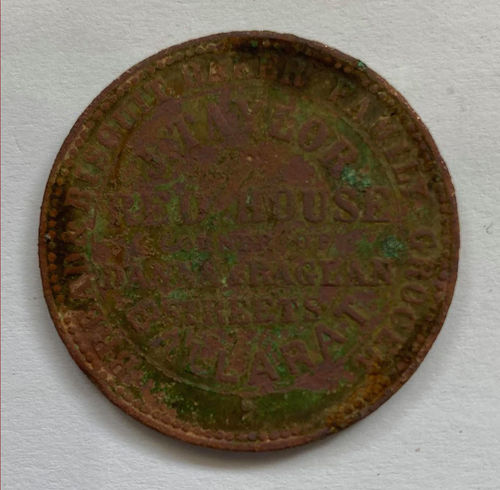 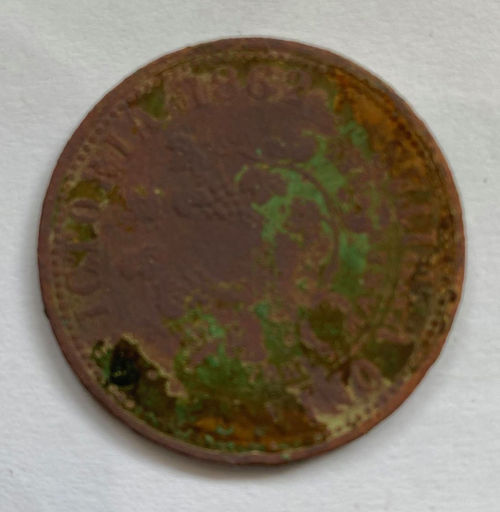 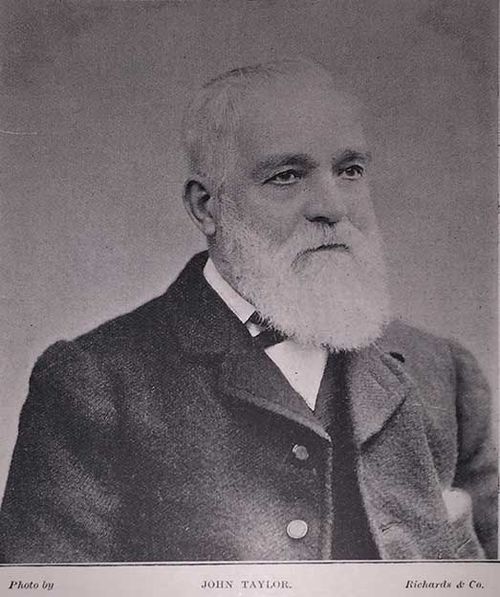 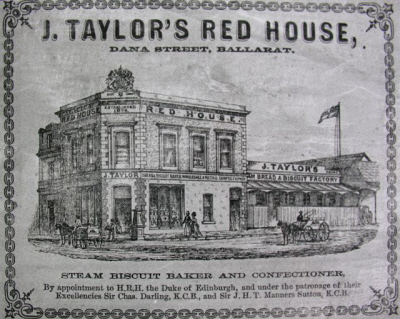 John Taylor, baker was the proprietor of the Red House Steam Biscuit Bakery and Confectionery. It was situated on the corner of Dana Street and Raglan Street. An advertisment for this company shows a double storied corner building 'establised 1854'.

John Taylor was a baker in England, and arrived in Australia in 1852. He 'visited Melbourne, Castlemaine, Creswick, Hard Hills, etc., and finally decided to settle in Ballarat, where he was very successful baker, employing many hands.[1] His business was under the immediate patronage of His Excellency Sir Charles Darling.[2] Steam machinery for the manufacture of biscuits, confectionery, etc was opened by His Excellency on 9 December 1863. [3]

John Taylor was a baker and confectioner in Dana Street in 1858.[4]

The business turned over £20,000 a year. During the 1860s Taylor advertised extensively in the Ballarat press. He took out a quarter page promotion in the 1862 Ballarat directory, describing himself as a 'Wholesale and Retails Grocer, and Bread and Biscuit Baker.' In 1863 he rebuilt his works and from that time on he placed the Governor's crest on his advertisements. His copy declared that he was 'Under the immediate Patronage of His Excellency Sir Charles Darling.' The text continued 'J. Taylor begs to announce that having completed the erection of his powerful steam machinery for the Manufacture of Biscuits, Confectionery, &c., His Excellency kindly honoured him by opening the works in person on Wednesday, December 9th, 1863, on which occasion he had the distinguished honour of receiving his first order from His Excellency,' (The Evening Times, 9/1/1864). As well as paying tribute to his patron, Taylor pointed out his capacity to take wholesale orders, and asserted that 'a single trial will suffice to establish the superiority and cheapness of the great variety of goods manufactured at his establishment.' His range of goods included biscuits, boiled sugars, and lozenges. In 1867 (under the patronage of His Excellency Sir H. Manners Sutton, K.C.B.) Taylor opened a second store, on the corner of Sturt and Raglan streets, it was 'a Retail Confectionery Establishment', providing 'a constant and fresh supply of Fruit, Pastry, Confectionery, Biscuits and Wedding Cakes.'[5]

Economic conditions in the mid 1870s led Taylor closing his shop and taking up farming at Boort for seven years. He resumed baking in 1881, taking up a shop at 526 Sturt Street, Ballarat, again establishing a very solid business. After his retirement he passed the business on to his son Robert, who was still managing it in 1910.[6]

MR JOHN TAYLOR.
The extensive bread, biscuit, pastry and confectionery business of the late Mr J. Taylor is now being ably carried on by Mrs Taylor, at the Red House, 176 Sturt street. This is one of the oldest and best known businesses in Ballarat, having been established in 1856. All customers are supplied with goods of the very best quality, and the house is noted particularly for its scones. A branch has been opened at 144 Skipton street, and is meeting with de-served support from the public.[8]

Although the building was demolished the site still features a flagstone footpath and an old post box (still functioning).

It was later used as the Queen's Girls Anglican School.

John Taylor had copper tokens made for him by Thomas Stokes of Melbourne in 1862.[11]

John Taylor was a member of the Old Colonists' Association.