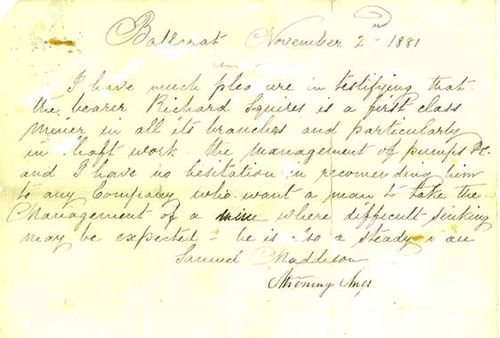 Richard Brereton Squire was born in Richmond[1] in 1855. His parents were Richard Squire and Anne (Nightingale).[2]

In 1912 Richard Squire as a mine manager of South Creswick.[3]

According correspondence during early 1930 Richard's sons were assisting with the mining ventures. Tom Squire was an investor in the mine and was funding the mine assistant, Ned E. Woodlock, at Mount Mercer. Jim Squire lived at Mount Mercer with his father, and assisted with the work. The correspondence was written from the Mount Mercer Mine site, but some was written from Richard's Melbourne home at 180 Albert Street, Prahran, Victoria.

In 1905 Richard Squire was manager of the West Berry Consols at Allendale, and developed an improved system of mine ventilation, which was supported in "The Age."[4] He was successful in combating and remedying the gas and ventilation troubles of the Deep Mines of Creswick and Allendale Districts after all had failed.[5]

MINE MANAGERS’ ASSOCIATION. Ballarat Branch. ... Mr R. B. Squire, manager of the West Berry Consols, at Allendale, submitted a paper detailing what he had done tor the betterment of ventilation in the alluvial mines of Smeaton and Mary borough districts- Members gave Mr Squire every credit for the results that he claimed to have effected; the adoption of his ideas had testified to their value to mine-owners. It was painted out, however, that for want of a thorough debate of the subject with experienced men the author had unwittingly included some general statements that required modifying in some points and extending in others, in justice to other workers among the earlier and the present day managers of mines. It was decided to invite the author to meet a sub-committee on this subject![6]

Richard Brereton Squire married Elizabeth Ellen Shaw (daughter of Thomas and Catherine Shaw) in 1879 in Victoria. Their children were:

Mr. Richard "Brereton" Squire, well known in the Ballarat district years go, where he was interested in a number of mines, including the famous Madame Berry Lead, died yesterday morning at his home in Portland-place, South Yarra. He was 85 years of age. He was born in Richmond, and finished his education at the Ballarat School of Mines. He became manager of his first mine at the age of 23 years at Ararat Grand Junction. Later he spent two years mining in Malaya. On his return he became interested in mines at Allendale, and was well known in the district. In 1905 he developed an improved system of mine ventilation, which was supported in "The Age." The deceased has lived in Melbourne since 1915.[7]

Mr. RICHARD B. SQUIRE (V.)
Mr. Richard B. Squire, one of the most widely known of the pioneer mining engineers of Australia, has died, aged 85, at his home in South Yarra (V.). He was associated notably with Squire's Mount Mercer Mine, and later with the famous Madame Berry field at Allendale and Smeaton. He was at one time managing director of the Cardigan Pty. mine at Bunker's Hill, near Ballarat, and was a past president of the Mine Managers' Association.[8]

Correspondence summaries on the Mount Mercer Mine at https://victoriancollections.net.au/items/57eb264ed0cdd11ea492c60b