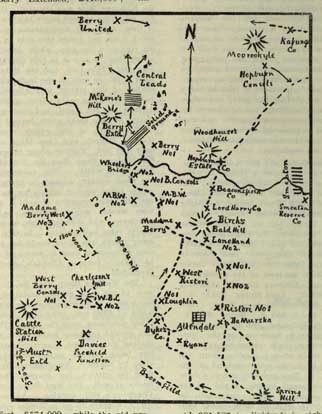 Born At Shotts Ironworks, part of the Parish of Bothwell, Lanarkshire, Scotland, 21 September 1837. Arrived in Australia in 1866 on the Champion of the Seas.

Robert Hamilton was one of the first students to enrol at the Ballarat School of Mines, sitting examinations in April 1873. He was experienced in mines before attending the school.[1]

Died in the Berry No. 1 mine at Smeaton.

After the death of her husband in 1887 Alice married Joseph Weir on 20 December 1893 at Latrobe Street, Ballarat according to the rites of the Presbyterian Church. Joseph, a mine manager, aged 52 years, had been living at 120 Ascot Street. A widower since 1877 when his wife Rebeccca (Fletcher) had died from peritonitis, he had produced five children, three of whom were still living. Joseph had been born in 1841 in Girvan, Ayreshire, Scotland to Joseph Weir (miner) and Christina Quail. When he married 52 year old Alice Webb Hamilton (Russell) they lived at 28 Latrobe Street, Sebastopol. She had produced 12 children ten of whom were still living.

A fatal accident occurred at Berry No. 1 Mine at about 11 o’clock this morning whereby engineer/driver, Robert Hamilton, lost his life. Two men were engaged in sewing the winding rope inside in the engine room. Hamilton, standing on the coils of rope, about 150 feet of which lay in front of the trestles where it was being stitched. The rope was seamed at the top of the shaft by iron hooks sewn together in the usual manner. Its slipping through these holes caused the accident. When the rope was slipping, Hamilton rushed between the spider, and turning around was caught by the rope and plank carrying it, his skull being fractured and one arm nearly torn off. Death was instantaneous. The body was removed to Smeaton awaiting official inquiry. The deceased’s family resides at Sebastopol and he was a steady and much respected man. Very little damage is done to the machinery beyond breaking one strand of rope and 2/3 strands of the spider.[2]