Smeaton was named by Captain John Hepburn after Smeaton in South Scotland. [1] It has always been important for agriculture on account of the rich volcanic soil.[2]

A major agricultural show was held annually and flour milling was an important activity.[3]

Four and often six in hand Cobb and Co. coaches ran between Ballarat and Castlemaine, passing through Smeaton around noon each day. They changed horses every 10 or 15 miles and had stables at the Standard Hotel, between Powlett Hill and Glengower. The service ended in the Smeatron locality with the coming of the Ballarat to Maryborough railway. [4] 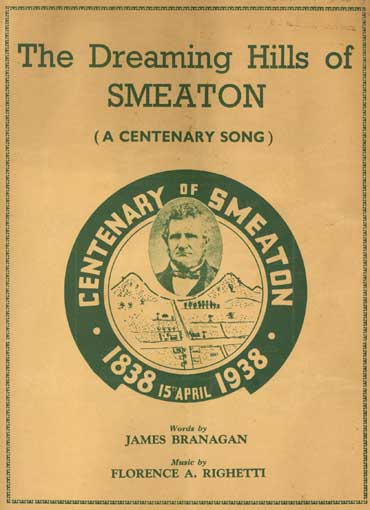 Cover of The Dreaming Hills of Smeaton,University of Ballarat Library Research Collection

On 15 April 1938 Smeaton celebrated its centenary. Over 3000 visitors participated in the opening of the celebration, and Prime Minister Lyons attended. Electricity was turned on at Smeaton for the first time at the official dinner. A centenary memorial to pioneers was dedicated and special church services were held.

A centenary song, The Dreaming Hills of Smeaton, was written by two Smeatonians to commemorate the centenary. The words were written by James Branagan and the music by Florence A. Righetti. 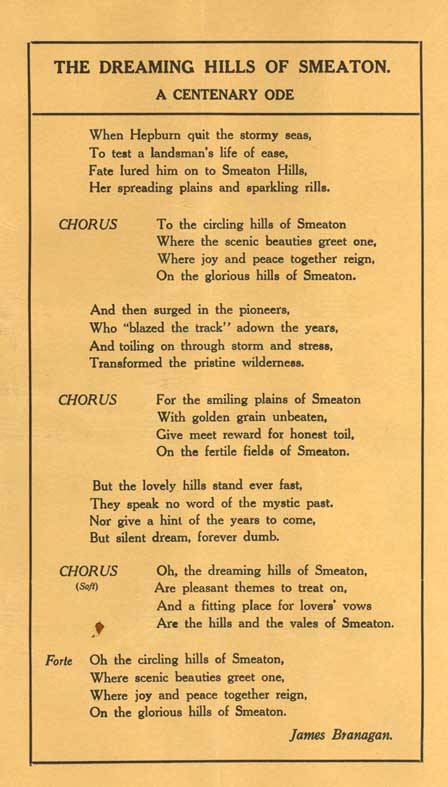 Cover of The Dreaming Hills of Smeaton by James Branagan,University of Ballarat Library Research Collection

CENTENARY OF SMEATON
Mr. Lyons Attends
CRESWICK, Sunday. - In the presence of a large crowd which had gathered in Corringarra street, the Prime Minister (Mr. Lyons) formally opened yesterday the Smeaton district centenary celebrations. Mr. Lyons was accompanied by his daughters, Sheila and Kathleen.
It is estimated that about 3,000 persons participated in the opening festivities.
Mr. Lyons said that Australia was passing through a period of anniversary celebrations. His own State of Tasmania was approaching its 150th anniversary. Compared with most other countries, Australia was young in actual years, our, it was old in experience. It was something to be thankful for that our history had been written not in blood but in the pioneering achievements of our forefathers.
What epic story could be written, Mr. Lyons asked, greater than that of Captain Hepburn, who, with his flock of sheep, his cattle, and his horses, crossed from New South Wales to the fertile land round Smeaton, where no white man had been before.
Mr. Lyons was the principal guest at an official dinner. In the evening the ceremony of switching on the electric supply for the town took place in the presence of about 3,000 people. Dame Enid Lyons was to have performed the ceremony, but in her absence through indisposition her place was taken by Miss Sheila Lyons.
Later Mr. H. S. Kilfoyle, chairman of the Melbourne committee of old Smeatonians, dedicated a memorial to the pioneers, which Mr. C. W. Sewell handed over, and Councillor A. C. Bousted accepted on behalf of the shire council, special services were held at the Presbyterian and Catholic churches to-day, and at the Mechanics' Hall by the Rev. H. C. Kent, for the Methodist Church.[5]