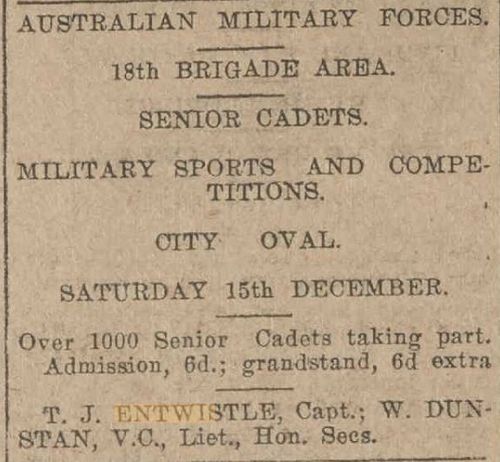 Thomas James Entwistle was a member of the 8th Light Horse Regiment during World War One.

Captain T. J. Entwistle. who, since his return from active service with the A.I.F., has been acting as an area officer in the Ballarat district, has been notified of his acceptance for duty in charge of reinforcements on board transport. Captain Enbwistle was rejected for further active service in the A.I.F.

In September 1916 T.J. Entwistle was area officer for Area 71A and 71B Senior Cadets.

T.J. Entwistle served during World War One and is shown on the honour board of the Old Colonist's Ballarat. He is yet to be honoured on the Ballarat Avenue of Honour.

EMPLOYER'S TIME. One of the cadets before the City. Court to-day was charged with being absent from drill on a stated date. Captain Entwistle, who prosecuted, said the case was an important ono, because defendant absented hipiself : during the time granted by his employer, and, as the employers were abiding loyally by the new orders, it was only right that drills should be put in when the time to do so Was given. Defendant's reply yes that he would have attended, but he slept in on the morning referred, to. He was fined 2/6, or. 24 hours' detention.[2]