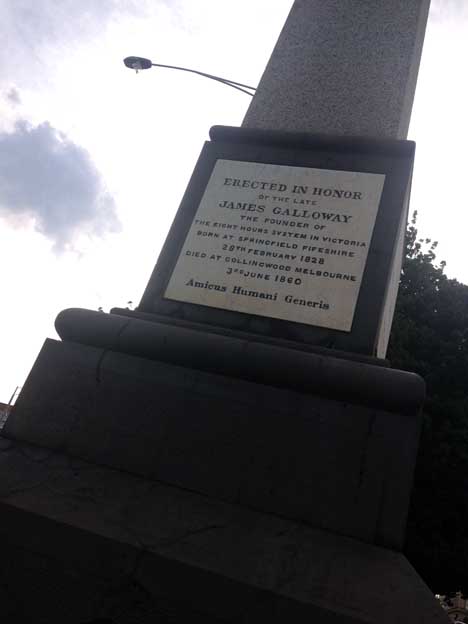 The Eight Hour Day Movement brings forward the notion of workers having a right to a work and life balance. Eight hours leisure, eight hours sleep and eight hours work. This was considered necessary in order to elevate their social and moral conditions.

The Eight Hour Day Movement started in Australia early March 1856, and workers went on strike the 21st of April 1856. The movement, also known as the 40 Hour Week Movement, had originated in Britain, deriving from the Industrial Revolution (a period of time from the 18th to the 19th century).

In Australia, negotiations took place between tradesmen and contractors in Melbourne, Victoria. The Victorian gold rush had enticed numerous accomplished tradespeople from Britain to Australia. The Colonial Government approved of this movement, and The Eight Hour Day was introduced into the building trades in Melbourne. Stonemasons led The Eight Hour Day Movement who contended that working for eight hours a day in the Australian heat and weather conditions was appropriate.

The link to the gold rush lies within the stonemasons need to quickly rectify buildings to accommodate the demand of the rapidly multiplying population, immigrating for the gold rush.

The Eight Hour Day Movement was widely celebrated as a world first and cultivated a reputation of Australia as being a 'workingman's paradise'. The agreement made between the workers and the The Melbourne Building Trades was that the working day would begin at 7am and finish at 5pm. And meals would account for 2 full hours.

A well known rhyme of the time for the movement was;

The numbers 888, a symbol of intertwined numbers, embellished the base of many union buildings around Australia. The Eight Hour March, commencing April 21, 1856, continued each year until 1951 in Melbourne. The Eight Hour Day Movement March is now celebrated as Labour Day, an annual holiday, still celebrated across Australia.

The Eight Hour Day Movement was led by James Stephens, T.W. Vine and James Galloway. These men had been involved in the Chartism Movement in Britain prior to migrating to Victoria for the gold rush. Chartism had strong links to the Ballarat region.