Timor West is situated about seven miles to the NW of Maryborough between Bet Bet and Limekin Creeks on part of the original sheep run of Alfred Joyce of Norwood. Settlers to the south were engaged in dairying, the country to the north was open and public common. Settlers were engaged in lime burning, there were 6 to 8 kilns employed 25 to 30 men until about 1870. [1] 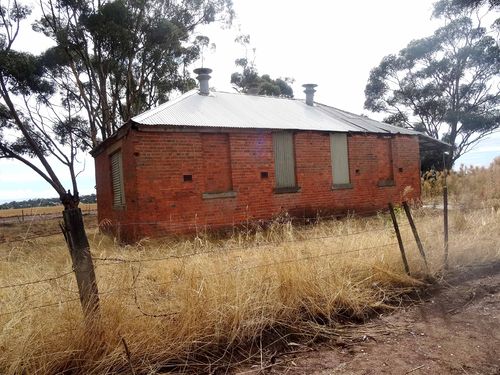 Some children attended the common school known as Dwyers Bridge at Bet Bet no 38, In 1868, the parents asked the Board for assistance in establishing a common school. A committee consisting of A Anderson, P Cameron, A Kegehen, H McKinley, T Costelloe, J Poyton and Chas McKinley raised money to build a school, this school was completed April 1869. The structure consisted of four bare walls with an iron roof, fireplace, door and windows. Plaster, porch, veranda, tanks and spouting have been added and was known as lower Wareek no 949 and appeared as Wareek and Timor. In 1873, the attendance rose from 50 to 120, due to the closure of some of the private schools, as a result the Department opened a large hall at Chinaman's Flat, as a Common School, which could accommodate up to 300 pupils. [2]

The name Timor West was locally adopted for the post office and school in 1874, the school closed in late 1942 or 1943 due to the lack of pupils. The remaining pupils were transferred to the Timor School number SS1207. [3]