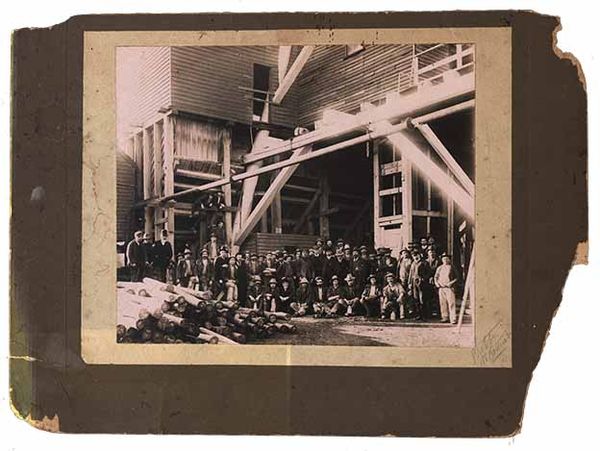 The Victoria United Gold Mine was located near the intersection of Princes Street North and Corbett Street, Ballarat East.[1]

The mine ceased operation in about 1917 - it is listed as the third richest alluvial mine on the memorial in Albert Street.[2]

In the 1940s a house was moved from Skipton and placed on the mine site - in the process the mullock heap was destroyed and spread over the area.[3]

Roger Clark subsequently lived at the house at 6 Princes Street North. The main shaft of the mine was directly outside the back door, and was only capped with concrete in the 1970s.[4]

Many buttons, bottles and other bits and pieces were dug up by the Clark children in those years.[5]

The half-acre block was subsequently subdivided, and the mine shaft now sits approximately on the back fence line of the house.[6]

The Photography class, to the number of a dozen, under the leadership of Mr Chas. Campbell, spent an afternoon below last Monday at Victoria United mine. Mr Hardy, the manager, very courteously showed the students through the workings at different levels, and pointed out many interesting features in the "country" underground. Several good photos. of the lode formations were obtained by flashlight.[7]

BALLARAT. — An important development occurred on Wednesday in the north drive at the 1200 feet level of the Victoria United Mine, Ballarat East, where, north of the big crosscourse, they have exposed a body of stone showing good gold and black jack. This shoot six months ago were under foot at the intermediate level, and since then they have driven from the level below towards it for a distance of 2200 feet. A rise was then put up for ventilation purposes north ot the crosscourse to a height of 60 feet, and the stone was then met with. At 4 p.m. on Wednesday they had gone into the ore 8 feet, and were not through. The mine manager, Mr. Crabbe; expects that the formation will prove to be about 8 feet wide. This development, if permanent, will add con siderably to the prospects of the mine in the northern section on the No, 1 line. So far the good payable gold in this quarter has been obtained on the No. 3 line on the Duchess slates. The company will declare another dividend of 6d. on Friday.[8]

Gift to the School of Mines Library - A large number of books on technical subjects have been generously presented to the Ballarat School of Mines by Mr Andrew Robertson, who has been conspicuously associated with the mining industry in Ballarat for years past. The publications include reports on Iron and Steel Institute, British Association of Science proceedings of the Institute of Civil Engineers, and the Mechanical engineers. [9]