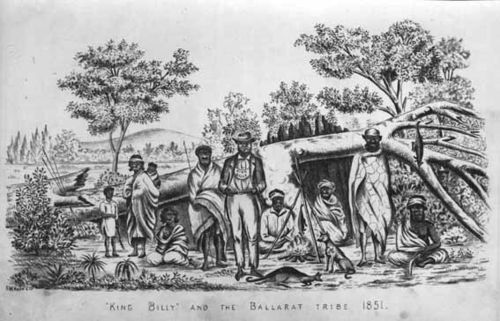 King Billy and the Ballarat Tribe 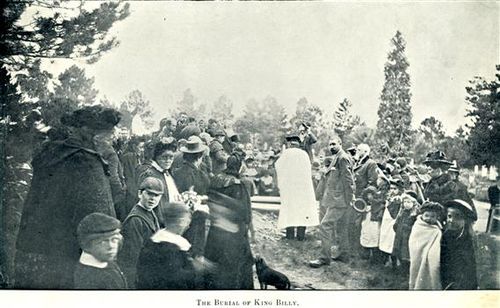 Burial of Mullawullah at the Ballaarat New Cemetery, 1896

Wadawurrung people are the Traditional Owners of the country that now includes towns such as Ballarat and Geelong. The Wadawurrung people have looked after and cared for the land for thousands of generations, and are still caring for it today through the Wathaurung Aboriginal Corporation (trading as Wadawurrung) representing Traditional Owner interests at all levels of government and community. The corporation has a statutory role in the management of Aboriginal heritage values and culture within our region, under the Victorian Aboriginal Heritage Act, 2006.[1]

BURIAL OF KING BILLY.
William Wilson, better known as "King Billy of Ercildoune," died at the Ballarat Hospital this morning from senile decay. As reported by the Ballarat correspondent of the "Age," the sable monarch was found in a moribund condition under a hedge; near Burrumbeet. For some timepast the "King"' has been in failing health, and it was felt by the residents of Ercildoune, Bur-rumbeet and Learmonth, through which districts he roamed, that his days on earth were rapidly drawing to a close. On this account the surrounding sheep farmer's and agriculturists showed special kindness to "Billy," but he preferred sleeping in the open air under a gum tree to being housed in a barn or wool-shed. When found yesterday under the hedge the blackfellow was being guarded by his dog, whose whining was heard by the railway stationmaster at Burrumbeet. Mounted-constable Perkins, on being summoned to attend the dying "ruler," offered him a small nobbler of whisky in the hope of reviving him, but the stimulant was refused by Billy, who, holding up his head, said, "No more drink; put me under a gum tree, please." As It was seen, however, that the aboriginal's condition was critical, Constable Perkins placed him in the guard's van of the Stawell to Ballarat train. As he was being removed on a stretcher to the railway station, the dog, Nero, howled piteously, and the policeman, in order to keep it from the railway station, tied it to a post and rail fence. The animal, however, broke loose from its fastenings, and as the train was about to start for Ballarat it jumped into the guard's van and fawned at the feet of the dying black. At the hospital an official suggested that the dog should be poisoned, but Constable Perkins refused to sanction the destruction of the faithful brute, which was taken to the city police station, where it whined nearly all night for King Billy. This morning the dog disappeared from the police station, and it has probably gone to the mia mia at Burrumbeet in search of the blackfellow. King Billy was supposed to be about 80 years of age.[2]