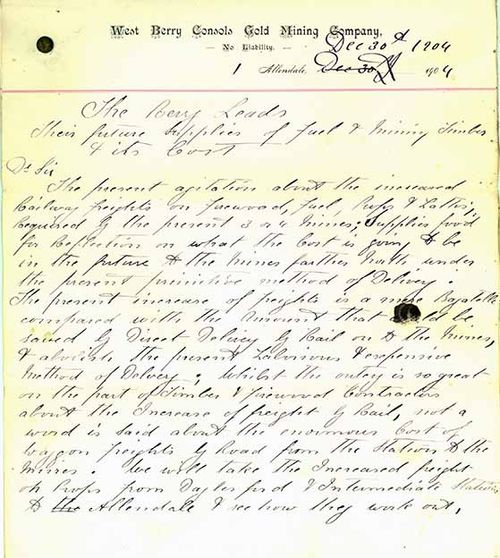 The West Berry Consols Gold Mining Company was established in the 1890s, and closed around 1910.[1]

The lease of the West Berry Consols was originally held by the Australasian Consols Company. After the West Berry Consols discovered a black wash carrying good gold they took over the adjoining lease previously held by the West Loughlin Company. The old shaft and workings were abandoned and a new shaft put down in the new lease. A reef drive was driven north. When it reached a distance of 300 feet a rise was put up about 60 feet into dry wash of fairly quality. It was successfully worked for some time before a drive was driven from the bottom level to the west into deeper ground. A number of men were put to work in that section. In the meantime Manager Richard Squire planned for the safe release of water from the old mine. A horizontal bore was put in, tubes, with safety valves at the opening to regulate the flow of water so there would be no sudden inrush, and the pumps would be allowed to cope with it. James Bowes considered Richard Squire the ablest allucial manager he had met, from the pulley wheels to the face, with a master mind, and the safety of his workers his first consideration. Squire wanted to drive an escape drive, but the directors turned the recommnedtion down considering it 'needless expense" resulting in Richard Squire's resignation. The next manager was a good farmer, no practical experience of mining. Due to safety concerns a strike took place. After the miner reopened a blacklist of those not to be employed was posted o each manager's office.The blacklisted names were Herbert Pearce, Jim Perkins. Mick Shehan, Alf Laffey, Bill McInerny, J. Mcgrath, Mark Downy, James Bowes and his brother Jack Bowes.[2]

ALLENDALE.-A magisterial inquiry as to the death of William Barratt in the West Berry Consols mine was opened on Monday by Mr. D. M'Grath. The company was represented by counsel and the officers of the Creswick Miners' Association were also in attendance. Mr. John Rowe, the mining inspector being unable to complete his inspection of the mine and be present, an adjournment was made till Wednesday. [3]

ALLENDALE, Sunday.--The West Berry Consols mine was the scene of a fatal accident at about half past 1 on Saturday afternoon, when William Barrett, a miner, resident at Wallacetown, near Allendale, lost his life. The deceased was employed as shootman at No. 2 shoot, his duty being to attend to the shoot and fill the trucks on the main level. William Cross, the shift boss, and Edward Cross, his son, who was engaged as a trucker, were with deceased at the bottom of the shoot, when the shoot got choked and he ascended a ladder in the manhole to probe the washdirt, to let it come away. Shortly afterwards they were startled by a disturbance and by the falling washdirt. They called to deceased, but got no answer. They called for assistance, and began to clear away the dirt, when they found the body of deceased, it having fallen to the bottom with the washdirt, and life was then extinct. It is conjectured that the shoot must have burst, either with the weight of the washdirt or the pressure of compressed air, and it is evident that the timber of the centre of the shoot shuck the deceased, as his skull was fractured. Dr. G. Ogle Moore and Constable Gardiner were immediately sent for. The body was removed to Allendale to await an inquest. The deceased, who was 33 years of age, leaves a widow and one son eight years old.[4]

BELIEVING THE ENGINEDRIVERS.
With the object of allowing the two regular enginedrivers on the mine to get much needed rest, Mr J. Simms made arrangements with Mr Squires, manager of the West Berry Consols, to have their engineer (Mr W. Noble) sent out to the Cardigan, and that engineer, who was formerly employed at the Cardigan mine and thoroughly understands the pumps there, was despatched at once. Indeed, to Mr Noble’s credit be it said, that although he had just come off his shift he hastened away to Ballarat at once, and was at the mine within a few hours of leaving the West Berry Consols.[6]