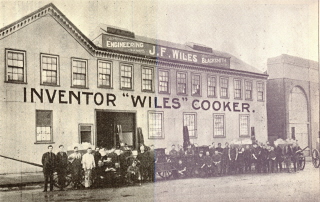 The Wiles Mobile and Stationary Steam Cooker was a horse-drawn travelling kitchen invented - before the outbreak of World War One - by Ballarat’s James Fletcher Wiles. Draft specifications to govern the supply of the "Wilies" Patent Steam Cooker were lodged with the Department of Defence in late 1915. 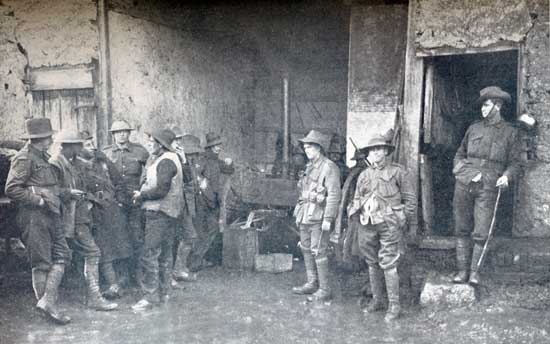 The Field Cooker in a Winter Billett Behind the Somme, c1917. Courtesy Federation University Historical Collection.

The Wiles Army Steam Cooker was first made just prior to the 1914-18 war and was invented by James Fletcher Wiles at Ballarat. It was a was a horse drawn travelling kitchen - a combination of steam boiler, roasting oven, hot and cold water tanks and a limber, which were connected by steam hoses and carried two large steamers or stock pots. The unit could be galloped behind a horse if necessary, with the wheels detached to lower the unit for more convenient cooking.[1]

After several trials before Military Boards, under worst conditions, it was adopted by Defense Department for service during World War One (1914-18). It was deemed successful to Brigade, Battalion, C.O.'S and men. Once adopted by the war office Wiles established a factory in Ballarat. The new factory produced over 300 cookers for the Federal Government. These units were used under active service conditions in Egypt and France. [1]

The unit underwent trials with the military and was subsequently used by the Defence Department in the 1914-1918 war. This necessitated the building of a factory at Ballarat. In February 1916 Wiles won a defense contract for 60 cookers to be used at Victorian Army Camps and overseas. In April 1916 a further 52 kitchens were ordered. The orders continued throughout World War One.[2]

After World War One fiscal and logistical pressures saw the Australian Army standardize all equipment to match that of the British Army; and Wiles Mobile and Stationary Steam Cooker fell from Defense Department use. James Wiles then sold his factory and became a fruit grower on the Murray River.[1]

Well after the cessation of hostilities the Australian Army, a decision was made to standardize all equipment to British Army methods, and the use of the Wiles Cooker was discontinued, and reverted to the use of the antiquated methods such as Soyer stoves, (wash boilers) Dixies, Mud trenches and Mud Aldershot ovens. James Fletcher Wiles was greatly disappointed with this decision and sold his engineering workshops at Ballarat, purchasing an irrigated fruit growing property with 100 acres of vines for dried fruit production located on the River Murray "New Era" near Cadell, South Australia. [1]

James Fletcher Wiles was a general ironfounder and engineer located at the old Phoenix Foundry site in Doveton Street.

During its time of operation, the factory turned out more than 300 cookers for the Defense Department contracts.[1] 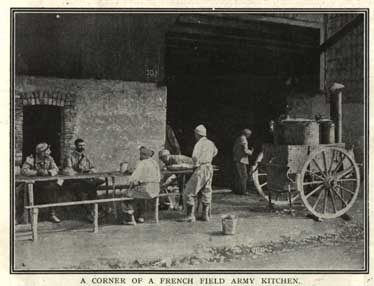 WILES COOKER THE INVENTOR HONORED. In the immediate future Mr J. F. Wiles, inventor of the cooker that bears his name, will proceed to England for the purpose of extending his sphere of business activity. Mayor Hill yesterday entertained Mr Wiles at the City Hall, and in the presence of a large and representative gathering of citizens wished him bon voyage and a full measure of success. The Mayor, after submitting the loyal toast, proposed "Success to Mr Wiles." In so doing he referred to the diversity of interests represented in that gathering, which he regarded as a tribute to the grit and determination of Mr Wiles in securing recognition for his meritorious invention. Prior to perfecting the "cooker" Mr Wiles had worked long and arduously, now its success has been demonstrated beyond question. While on a visit to the city recently the Russian Consul had predicted a great future for the cooker, and is was difficult to foresee at present in what way the distinguished visitor's re marks would apply. He wished Mr Wiles all the success his industry inventive genius, and mechanical skill entitled him to. Lt-Col Bolton referred to Mr Wiles' association with the 7th Regiment, as a member of which his interest in the cooking had induced the speaker (Lt-Col Bolton) to appoint him to supervise the cooking for the 3rd Battalion. That position awakened Mr Wiles to an appreciation of what was required for the proper feeding of soldiers in the field, and the splendid cooker which now bore his name stood as a monument to his seal and ability to combine the theoretical with the practical. Mr W. H. Chandler referred to the gratifying accounts received from the men at the Front regarding the Wiles cooker, and to the fact that it had fulfilled all its inventor had put forward in support of its adoption. Mr W. H. Middleton. president of the School of Mines Council, after joining in the general theme of congratulation, remarked on Mr Wiles "stickabilty" in his efforts to secure proper recognition for his cooker. Mr C. H. Burrow regretted that the a magnificent cooker did not exist in his soldiering days, because be realised its value in active military operations. For four months, while the kitchen at the Benevolent Asylum was under construction, a Wiles cooker had done service, and during that period it daily cooked for 230 inmates, together with sick patients and the staff, without a single hitch. Mr W. F. Coltman, president of the Forward Ballarat Movement, testified to the efficiency of the cooker. which had stood the severest tests to which it had been submitted. Mjr M. Baird. M.L.A.. who had had practical inexperience of the cooker in actual warfare, stated the feeding difficult ties of his battalion had been greatly lessened by the Wiles cooker. Cr Alexander Bell (c1851-1931), Messrs J. T. M'Gregor, W. H. Gent.and M. M'Callum supported tho toast. Mr Wiles, in reply, said ambition had always played an important part in his life: his desire from boyhood being to get to the top. He was soldiering in the South African war at the age of 17 years, and it was there he realised the inadequacy of the arrangement for feeding the soldiers. He had been asked why he did not go to Melbourne and there establish his industry". His answer was he had faith in Ballarat. He had enjoyed his life here, all his interests had always been centred here. Although only 39 years of ago he had a wife, and the nucleus of a family in five sons and one daughter. (Laughter and applause.) He owed much to Ballarat: he had learned much by being associated with different local institutions, and he would always be delighted to return to it. By the aid of the "Forward Ballarat" movement he hoped before the lapse of many years to see the present policy of centralisation substituted by a system of fares and freights that would place country manufacturers on the same basis as the Melbourne competitor. He was deeply indebted to the press of Ballarat for the assistance it had rendered in bringing the merits of the cooker before the public. Local politicians of all creeds had assisted him by their influence. He was confident of success on the "other side," because his cooker had proved superior, on the admission of indisputable authorities, to all others yet placed at the disposal of the military. The use of steam for cookers had been disapproved of by many experts, but he had proved that high pressure steam was the most efficient method of feeding the fighting men. In his manufacture he had been greatly encouraged by Col (Dr) Hardy, who was really the father of the cooker. If the conscription referendum had been carried he would have been in a position to employ 200 more men at his works, but he hoped to overcome that disappointment by the success he would achieve in the Old Country.[3]