William Trewhella was born at Barry's Reef Blackwood on 23 September 1859.

He was the second son of Benjamin and Betsy Trewhella. Benjamin arrived in Melbourne in 1854 from Lelant in Cornwall. Cornwall is a small maritime county in the southernmost part of England renowned for its tin mining. Benjamin had worked as an engineer in the tin mines. When the tin became scarce he was drawn to Victoria by the gold discoveries. After six months on the diggings at Castlemaine, Benjamin made his way to Simmons Reef, a short distance west of Backwood. In 1857 Benjamin and his brothers pegged out a claim at Barry's Reef, three kilometers north of Backwood. It was here at the successful Barry's Reef mine that Betsy and Benjamin junior joined him from Cornwall in 1858 and William Trewhella was born in 1859. [1]

William would have spent his early years running around the diggings. The school at Barry's Reef opened when he was eight years of age , so it is probable that William was a pupil. The mine was sold after a few years and the proceeds used to purchase eighty acres of land situated on the western slopes of Blue Mountain , six kilometers south of Trentham. The virgin land was cleared and a farm developed. After leaving school it is presumed that William either worked on his father's farm or as a timber worker. He was sixteen when he started an apprenticeship as a fitter and engineer at the Phoenix Foundry Ballarat and attended the Ballarat School of Mines. After his seventh and final year as an apprentice William worked for the Phoenix Foundry for about twelve months. He then returned home to the farm where he did machinery repair work and saw sharpening for the local mills and mines. In 1887 William and his brother Ben bought James Lyon's sawmill at Blue Mountain (Lyonville was named after James Lyon). They traded under the name "Trewhella Bros, Sawmillers, Engineers and Blacksmiths Newbury near Trentham". As an engineer William designed the Trewhella Jack, the Sawyer's Bench Gauge and grubbers. [2]

William married Margaret Landrigan in 1890. In 1893 when it became difficult to find logs in the vicinity of the mill, William and his brother went their separate ways. William and his wife moved into Trentham where he opened an engineering shop in a four-bedroom cottage in Victoria Street. It was called "Sunnyside Ironworks" and became known locally as the Trewhella Foundry. Eventually William and his wife moved to a house next to the foundry where his family lived until his daughter's death in 1970. The Trewhella Foundry pattern shop was built on the eastern side of this house. [3]

William died at Trentham in 1951 at the age of ninety one years. He and Margaret are buried in the Trentham Cemetery.[4]

Along with his brother Benjamin Trewhella, William founded the Trewhella Foundry in Trentham in 1888.[5]

As an engineer William designed the Trewhella Jack, the Sawyer's Bench Gauge and grubbers.

The Trewhella Jack was an improvement on the slow German jack used for handing the large logs in sawmills. The patent application for the quick acting lever jack or Trewhella Jack as it became known, was registered with the New South Wales Patents Office on 4 June 1889. A lathe and planing machine were procured to help with its manufacture in the mill's blacksmith shop. Each jack was made by hand and tested before being dispatched. This set a standard and created a demand. The jacks were made in two sizes. The single purchase jack was for lifts up to two and half tons and lifted on the down stroke of the handle only. The double purchase jack made of heavier iron lifted on both up and down strokes for lifts up to four tons. William also took out patents on the Trademarks of "Tower", "Wallaby" and "Monkey" which were different types of jacks manufactured by the Trewhellas. The Monkey Jack had an eight ton lift and was designed for grubbing trees and stumps.[6] The Wallaby Jack invented in 1888 was indispensable for moving heavy timber, sawmilling and removing tree stumps. [7]

The Sawyer's Bench Gauge gauged the the thickness of timber being cut. The Phosphor-Bronze gauge replaced the wooden gauges that were slow to use, dangerous and often resulted in inconsistent timber widths. [8] The following advertisement for the Trewhella Gauge appeared in the Western Australian Bunbury Herald on Saturday 20 April 1912.[9] 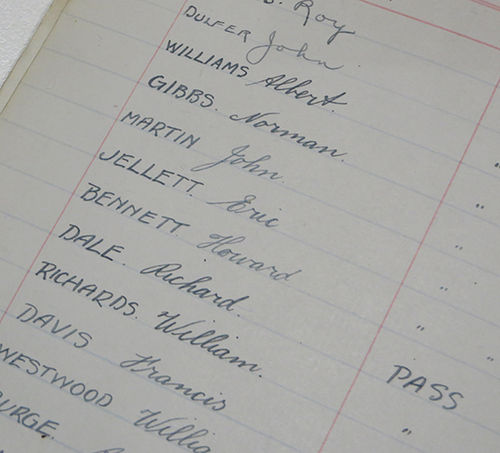 TREWHELLA BROS.
TRENTHAM, VICTORIA.
SAWYER'S BENCH GAUGE.
THE FASTEST, SAFEST, and BEST BENCH GAUGE for Forest Mills.
QUICK. HANDY, DURABLE and REMOVABLE.
Each notch represents one inch. A Hand Wheel regulates to quarter-inch, and the Thumb Screw adjusts between.
Save time and 1-64 inch of timber by more even cutting, and you have its
price each, month.
TREWHELLA BROS.,
Engineers, Trentham, Victoria.

TRENTHAM. — Mrs. Margaret Trewhella, wife of Mr. William Trewhella, of the Trentham Sunnyside Ironworks, died on Monday afternoon from typhoid. There are three other cases in the same family.[10]

TRENTHAM. — The firm of Messrs. Trewhella Bros., of the Sunnyside Ironworks, having been merged into a proprietary company, Mr William Trewhella on Monday night entertained the whole of the employees of the firm at a social in connection with his retirement from the business.[11]