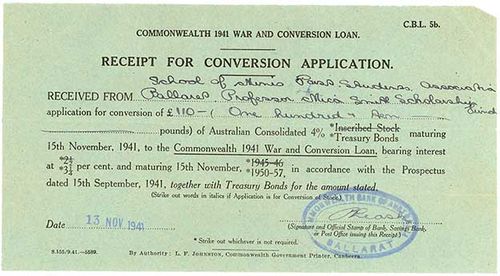 During World War Two many Ballarat industries started manufacturing for the war effort.

The Ballarat Airport became a R.A.A.F military base during World War Two. The No 1 Wireless Air Gunners School was formed at the base in 1940 by the R.A.A.F [1].

Victoria's 8th Infantry Battalion was known as the "City of Ballarat Regiment" as Militia units were also known by the name of their shires. The battalion was headquartered in Ballarat, with companies established in Ararat, Stawell, and Daylesford. [2].

Harold Herbert attended the Ballarat School of Mines and worked at the Ballarat Technical Art School there, becoming principal in 1916. Herbert was appointed one of the first official war artists of World War Two, along with Ivor Hele, and until 1944 he was an accredited war correspondent for Australasia [3].

In 1940, the R.A.A.F recruitment headquarters for Ballarat were in the Ballarart School of Mines Museum. [4].

Successful applicants for positions as engineers, for munitions work, were trained at the Ballarat School of Mines after many vacancies existed in "Commonwealth munitions works for engineers over the age of 21" in 1940 [5]. The Ballarat School of Mines offered training classes to professional and business men and semi-trained young men so they could gain sufficient knowledge of engineering and were thus able to assist in the expected citizens' effort to help in the manufacture of munitions, in Ballarat [6].

In 1940 men with previous knowledge of the metal work trades were encouraged to undertake further training for employment in the manufacture of munitions for the department of Supply and development.[8] Munitions classes were conducted at the Ballarat School of Mines by W.G. Warburton in 1941.[9]

Defence Training Classes
The defence training classes at the School of Mines have closed. The classes commenced operation in July 1940, and since then 276 students have passed into employment in the munitions industry.[10]

In 1941 the Ballarat School of Mines taught classes for 'lady tracers'. The first intake took place on 04 March 1941 with classes taking place on Tuesday and Wednesday mornings.[11]

"Although considerable interest is being shown in the class for lady tracers at the School of Mines there are still vacancies in it. It may be explained that the original drawing of a machine by a skilled technician is done in pencil. It is copied on copying cloth by the lady tracer, and from this the familiar blue print is made. [12].

A surveyor would plot co-ordinates on cartridge paper and the tracer would trace the surveyors detail onto linen in reality making the actual map/plan. The original drawing of a machine was done in pencil by a skilled technician. The lady tracer copied this onto copying cloth and from this, the familiar blue print was made [13].

The Ballarat School of Mines authorities proposed to start a class for those "desirous of entering upon that avocation if there were enough of them", after a paragraph in the Ballarat Courier drew attention to the demand for lady tracers. A number of inquires were made and a class began in 1941, running on Tuesdays and Wednesdays [14].

"The lady tracers' class was a success at the Ballarat School of Mines, with 10 of the 13 students having been passed onto employment in Melbourne, after around 10 weeks of study. The students were very keen and many visited the school workshop to make themselves familiar with the machines they were drawing, due to not being satisfied with just the drawings. Majority of the students had some previous experience in drawing, and while it was an advantage, it wasn't necessary.[15].

Lady Tracers
The class for lady tracers has been very successful since its introduction at the School of Mines. twenty-four have been placed in positions, and there are now vacancies for more in the class. [16]

In 1940 there was a strong branch of the Junior Red Cross at the Ballarat School of Mines with about 80 members. 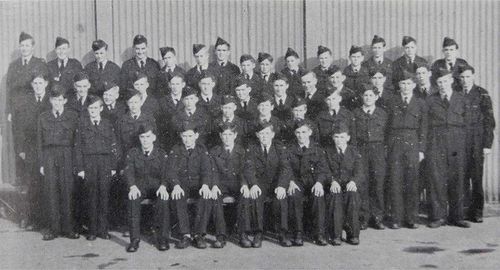 A large part of the Ballarat School of Mines' activities are at present concerned with a special group of young men - the students training under the Commonwealth Reconstruction Training Scheme (C.R.T.S.). There are at the School of Mines thirtyseven ex-servicemen undertaking full-time professional courses, and a number of munitions annexe doing trade training courses.
To protect the interests of ex-service students in all schools and annexes the Victorian Council of Reconstruction Trainees (V.C.T.R.) has been reformed. This Council originated at the University, but was not a great success. Finally, the University and Melbourne Technical College together decided to revive the organisation. These two establishments have a total of over 7,000 ex-service students on their rolls.
To encourage wider interest in the affairs of ex-servicemen, particularly in country training centres, a conference was held recently in Melbourne to which all country centres were invited to send delegates. At S.M.B., the ex-servicemen attended a meeting at which a branch was formed. The Melbourne Conference wer sent two delegates who reported back to us on progress made.
The aims of the organisation are to bring the ex-service students' plight before the public eye, and endeavour to improve the living allowance now paid; the removal of restrictions attached to living allowance after three years, and liberalizing the conditions of tuition and grants for books and instruments. These are the main worries here in Ballarat; nut all those students with other troubles will, if possible, be helped.
Do not forget that these courses were not wholly inaugurated as a practical means of showing the nation;s gratitude; but partly because the Commonwealth Government could see in technically trained ex-servicemen a group of highly skilled men with greatly diversified experience who, in the event of future trouble,m, would be available for technical defence, In view of this, there should most certainly not be any grants, or niggardly allowances. We do not expect something for nothing; but wer do desire to be fairly treated.