Originally the field on which the mine is located was alluvial, and miners considered it washed out when the alluvial deposits were exhausted. Some of them, however, thought they would emulate the Bendigo goldfields as a reefing field on the lower levels, and they began to sink. 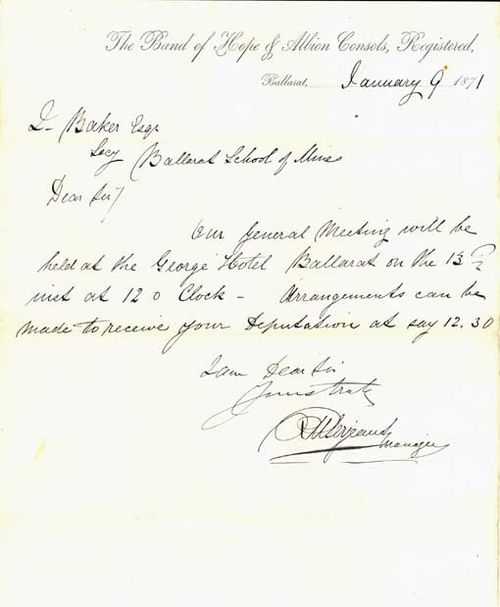 The former Band of Hope and Albion Consols Co. No. 1 Shaft mine saw more than 1.6 million ounces of gold produced from 1868-1890. The mine went almost 1km below the surface.[1]

In March 2020 the land, at 43-55 Grant Street, was earmarked for a subdivision. Under the papers lodged by planners iPlanning, the average lot size for this application will be 563m2 with lot frontages ranging from 13.5m to 20m and access via Hill, Grant and Vickers streets. Two news roads are also proposed along Vickers Street and Hill Street as potential links between the two for any future development in the centre grassland area where the mine once operated.[3]

This company donated 5 guineas towards a reverberatory furnace for treating Pyrites at the Ballarat School of Mines.[4]

Often known as the Band and Albion.

The ceremony of naming the new, quartz battery of the Band of Hope and Albion Console Mining Company, Victoria, took place a few days ago. The history of this mine dates back for about a quarter of a century. For many years its workings were purely alluvial and so large was its yield of gold that it was known as the richest alluvial mine in the world. Eventually, however the mine became flooded with water from other claims, and the alluvial operations were brought to an end. The company then turned their attention to seeking for quartz, and met with great success. They have gradually traced up the runs of gold from the lower washes or gutters, from terrace to terrace, until they have at last found the source of the whole formation—the lode, which must have supplied what, gold was found in the former workings. They now propose to open up the reefs to a lower depth than even the gutter workings. The width of the main, lode is not known yet, but it is believed to be very large, and it has been already worked to a depth of between 40 ft and 50 ft. So far, the yields from the quartz crushed have been most encouraging. They, have had ns much us 1,800 ozs. from 500 tons as a fortnight's work with 20 head of stampers. ... [6]