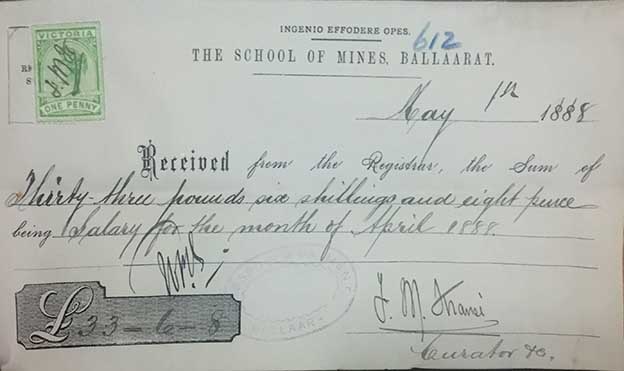 Ferdinand Moritz Krause, F.G.S., F.L.S., C.E. was born at Cassell, Germany in 1841. He arrived at Melbourne in the Black Eagle in January 1859, and was naturalised in 1868. Krause was a Civil Engineer and Geologist, and had worked with the Victorian Geological Survey Staff before taking up the position at Ballarat.

Professor Krause joined the staff of the Ballarat School of Mines in June 1880. He lectured in Mineralogy and Geology and was the curator of the Ballarat School of Mines Museum. He also gave occasional lectures at the branch school of Clunes.[2] Along with Professor Alfred Mica Smith, Krause laid the foundation of the future great success of the School.

Krause resigned for the Ballarat School of Mines and ceased duty on 16 August 1896. [3]

During the year the Council have, for the first time, exercised authority vested i them, by establishing Chairs in these branches of science, in accordance with Art. 3, Cap. 4, of the Constitution. Messrs A. Mica Smith, B.Sc., and F.M. Krause, late Field Geologist to H.M. Government, Victoria, both on the staff of The School, have been appointed Professors of Chemistry, and Geology, respectively. The wide experience and great attainments of these gentlemen in their respective branches, eminently qualify them for, and entitle them to, the distinction conferred. [4]

Krause was the first honorary secretary of the Ballarat Field Club & Science Society. [5]

Invited by a former student, George Denny, Krausé left for South Africa in 1901. His last work was a geological map of the Barberton area, Transvaal, published in March 1918. He died on 16 June[6] at Durban, Union of South Africa,[7] survived by his wife, three sons and a daughter.[8]