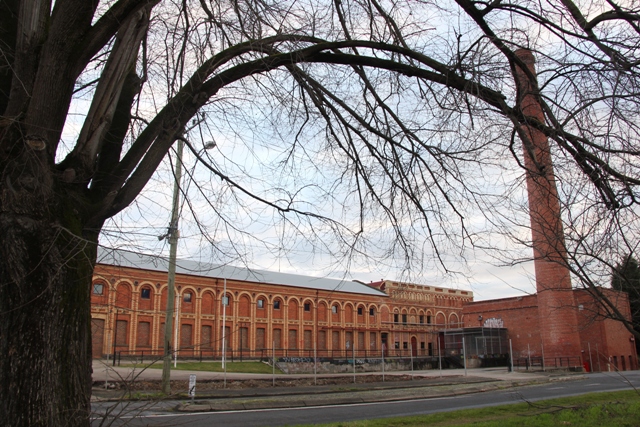 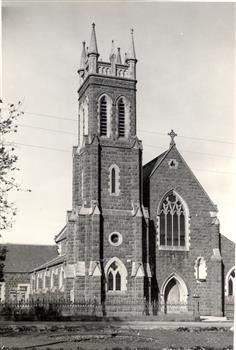 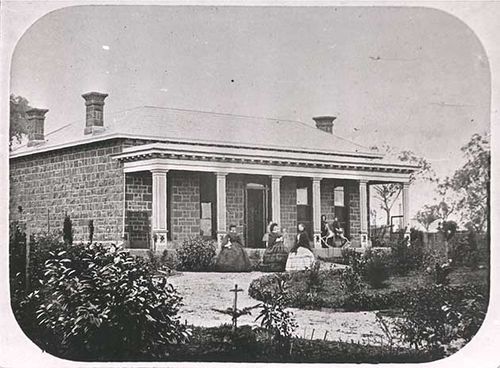 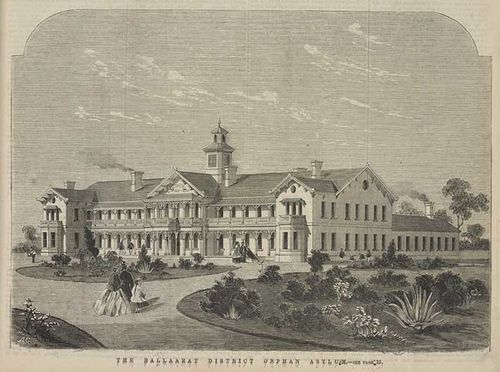 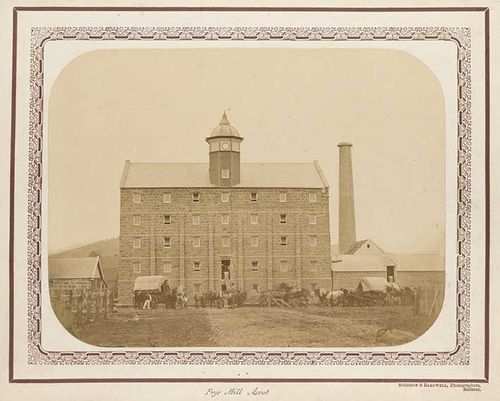 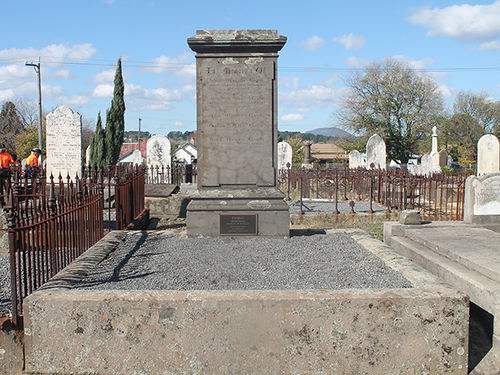 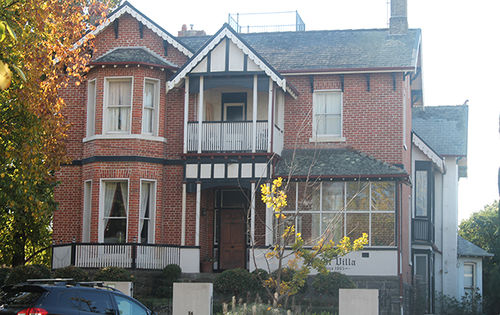 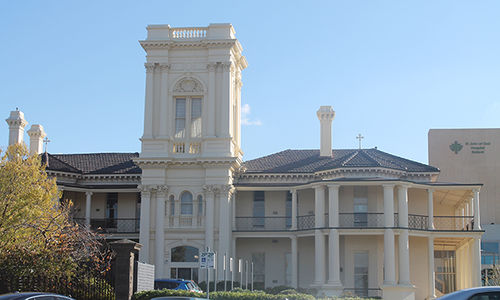 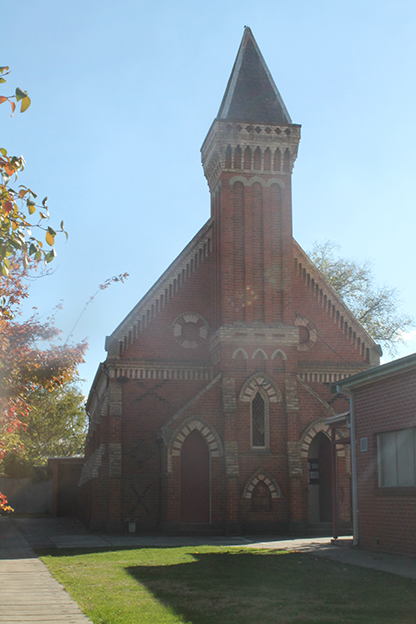 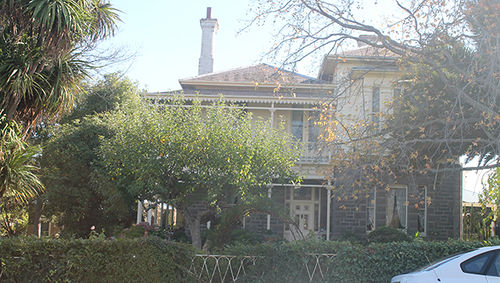 House on the Corner of Hotham and Devon St, Ballarat[Photographer Julia Walsh. 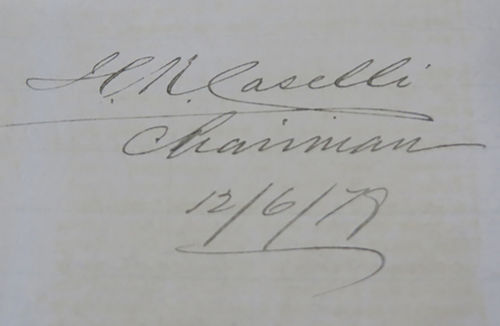 Henry Caselli was an architect and surveyor operating from premises on Webster Street, Ballarat in 1858.[1]

Henry Richards Caselli was born at Falmouth, Cornwall in 1816, and was baptised there on 23 June 1816.[2] The son of a gentleman and naval architect, Henry Caselli's parent were Italian parents. Before he arrived in Australia in 1852 on board the Gazelle. he was apprenticed to a shipyard for seven years and later became a naval architect, on his arrival he stated his occupation as a Mast and Block maker. He worked for Lloyd’s Surveyor in Geelong until 1856 then tried his luck on the Ballarat Goldfields. After minor success digging for gold he returned to architecture, with an office at the Chamber of Commerce Buildings in Sturt Street, Ballarat.

Henry Caselli was the architect of many buildings around Ballarat including:

At the age of 69 Caselli died in 1885 at Ballarat and is buried in the Ballarat Old Cemetery.

The death of Mr H.R. Caselli, J.P. drew forth many expressions of regret in Ballarat yesterday, and numerous remarks were made to the effect that before long all the old colonists will have passed away. Flags were again flying half-mast yesterday. It is understood that the members of the Ballarat Yacht Club, the City Rowing Club, and other bodied will attend the funeral today. The brethren of the Yarrowee Lodge of Freemasons, and the companions of the Yarrowee Chapter, are invited to pay their last tribute to the deceased gentleman. It has been arranged that the remains will be removed at 11 o’clock from the residence, Webster street, to Christ Church Pro-Cathedral, and after the usual funeral service there, the body will next be conveyed to the Masonic Hall, Camp street, at which place an emergency communication and an emergency convocation will be held. After these tributes the funeral, which will be a large one, will move to the Old Cemetery. The funeral procession will be formed as follows :- Masonic body; hearse, relatives, private friends, City council, Town Council, committees of charitable institutions and other public bodies, private and other conveyances to follow. The route of the procession will be from Christ Church, along Lydiard street to Mair and Camp streets to the Masonic Hall facing south, then move and form along Sturt street to Drummond street and thence to the Old Cemetery. All drivers of vehicles are requested to observe proper distances to prevent accidents in the event of any unforeseen stoppage. Col. Sleep will act as marshall. Yesterday morning Mr F.M. Claxton, telegraphed to Mr R. Ford, one of the Railway Commissioners, asking if anyone having tickets for the Ironworkers’ excursion could attend Mr Caselli’s funeral, and then proceed to Melbourne by the afternoon train to-day. To this request the following reply was received:- No objection to a limited number coming by 3.55 train (Signed) RICHARD FORD [52]

FUNERAL OF THE LATE MR H.R. CASELLI - The remains of the late Mr. H.R. Caselli were interred yesterday in the Old Cemetery, and were followed to their last resting place by numbers of our most influential citizens and mourning friends of the deceased. The funeral procession left his late residence, Webster St, shortly after 11 o’clock in the morning, for Christ Church Pro Cathedral, where the usual Church of England service for the dead was conducted. The coffin, which was met by Archdeacon Julius, was placed in front of the communion rail in the centre of the church. On the clack pall which covered it were placed the deceased gentleman’s Masonic regalia and a number of wreaths of white flowers. During the service the church was crowded to its fullest capacity, members of all denominations and all classes being present. The service was conducted by the Ven. Archdeacon Julius, the Bishop and Archdeacons Beamish and Cooper occupying seats in the chancel. The members of the Church Assembly now sitting occupied the north transept. After the singing of a psalm by the choir, the whole congregation joined in the singing of the hymn, beginning 'When our Heads are Bowed with Woe'. The 15th chapter of St. Paul’s First Epistle to the Corinthians was then read by the Archdeacon. Bishop Thornton spoke in a most touching manner of the deceased. The black pall before them covered a face they all loved, and how he was lying on a marble slab which he had himself a building of love, for they feared the loss they had sustained. He had reared for himself a building of love which would live in their hearts and the hearts and their children’s hearts long after the earthly buildings over whose erection he had presided would have crumbled to dust. The bishop asked whether there was anyone in the whole of Ballarat if whom he had made an enemy, and concluded his pathetic address by a farewell apostrophe which brought tears to the eyes of many present. At the conclusion of the service the 'Dead March' was played on the organ by Mr G. Hobart. From the church the funeral cortege proceeded along Lydiard street, Mair street, and Camp street to the Masonic Hall, where the Masonic service was conducted. The procession from the hall was headed by a very large number of members of the Masonic Lodges, then came the hearse, two mourning coaches, the City Fire Brigade, and numerous private vehicles. Among the bodies represented were the City and Town Councils, the Juvenile Industrial Exhibition Committee, the Yacht Club, City Rowing Club, Ballarat Public Library, the various charitable institutions, and others. The route taken was along Sturt street and Drummond street to the the Old Cemetery. The City Fire Brigade bell was tolled as the funeral procession passed. The service at the grave was conducted by the Ven. Archdeacon Julius, assisted by the Rev. Julius Lewis, of Maryborough, former incumbent of Christ Church. The Masonic ceremonial was performed by Mr F. M. Claxton, I. P. M., Yarrowee Lodge, the Rev. H. J. Carr acting as chaplain. Mr Morris, in whose hands the mortuary arrangements were, had the grave roped in, to prevent any crushing of merely curious person to the place. The pall-bearers who acted at the house and the church were Messrs T. Clegg, James Orr, F. C. Downes, E. Morey, W. P. Bechervaise, T. Rogers, W. Little, and C. D. Figgis; and the coffin-bearers Messrs W. F. Presham, E. Price (employees in Mr Caselli’s office) R. Tor (of the City Rowing Club), and W. H. Jones (general secretary of the Y.M.C.A). t the Masonic Hall and at the grave the following gentleman officiated - Coffin-bearers, Messrs James, W. Robertson, T. McConnell, Wilson, Fern, and Donaldson; pall-bearers, Messrs Clarke, Byers, Wattis, Leggo, and John Hardy. A large number of persons lined the route to the cemetery, and many of the places of business were close.[53]

Band of Hope Gold Mine