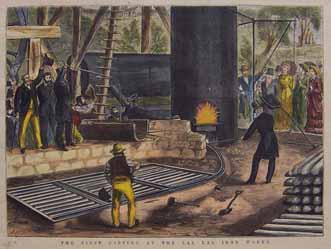 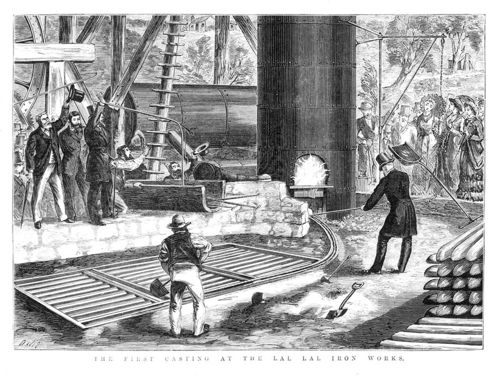 Lal Lal iron was used by many Ballarat foundries, including the Phoenix Foundry. It was used for many purposes from the shoes of stamping batteries to the decorative cast iron used for house decoration.

Iron ore mining began in the Lal Lal district in 1857. The Lal Lal Iron Mining Company was formed in 1874 after the liquidation of the Victoria Iron Company.[1] The plant including the Lal Lal Blast Furnace was opened in 1878 but a new and larger blast furnace was built two years later. The mine reached its peak in 1884 when 1,600 tons of ore was smelted and 800 tons of pig iron produced. Within a few years production rapidly declined.

The company set up an iron ore quarry and smelting works, which at its peak employed 160 men. Charcoal from local timber, brown coal from the area and Ballarat coke were all used as fuel for the smelting process.[2]

The fist furnace installed was very crude and consisteed of a boiler shell lined with fire brick. The fuel used was charcoal and the limestone flux was obtained from Geelong. Later an improved type was built, using coke as fuel, and the output rose to 5 tons per day.[3]

Lal Lal is in the vicinity of the Victorian town of Ballarat.

The venture was an outstanding example of the spirit of local enterprise. [5]

The gates and iron railings around Ballarat's St Patrick's Cathedral and the Ballaarat Old Cemetery gates were fabricated from Lal Lal iron.[6]