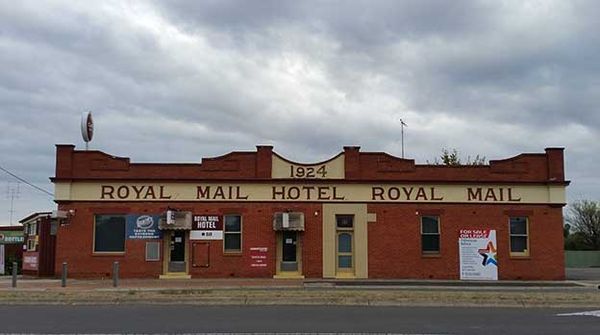 For other hotels with the same or similar names, see Royal Mail Hotel.

The Royal Mail Hotel was a hotel in Sebastopol, Victoria, <1915>.

The Royal Mail Hotel opened in 1866, and the current front was added to the building in 1924.[1] Before the new front was built the door was at the front left hand corner.[2]

In 1866 T. Pengelly of the Royal Mail Hotel requested permission from the Sebastopol Borough Council to break the pathway to enable the building of a cellar.[3]

On 22 March 1915, the hotel was included on a list of hotels to be deprived of their licenses. This list was complied by the Licenses Reduction Board in Melbourne. Licensing district hearings for hotels on this list were to be held at the Ballarat Supreme Court on 11 May.[4]

The Royal Mail Hotel was court-appointed a liquidator in April 2018.[5]

The Royal Mail Hotel in Sebastopol was the last tram stop during the era of Ballarat trams.

The Licensing Court has approved of the transfer of the following victuallers' licences:— Royal Mail Hotel, Sebastopol, Roderick McKissock to Lawrence Flynn. ... [10]

I had the pleasure to-day of viewing available and interesting collection of shells at the residence of Mr F. H. Ingle, of the Royal Mail hotel. The shells were presented to Mr lngle by the engineer of a boat connected with .the Western Australian pearl fisheries, and' include the sword, of a sword fish, and a shell dress of the wife of one of the native chiefs.' The collection is well worth inspection.<re>Ballarat Star, 29 January 1885.</ref>